Hidden gems of Anatolia: Asklepion, the health and wellness retreat of ancient Greece and Rome 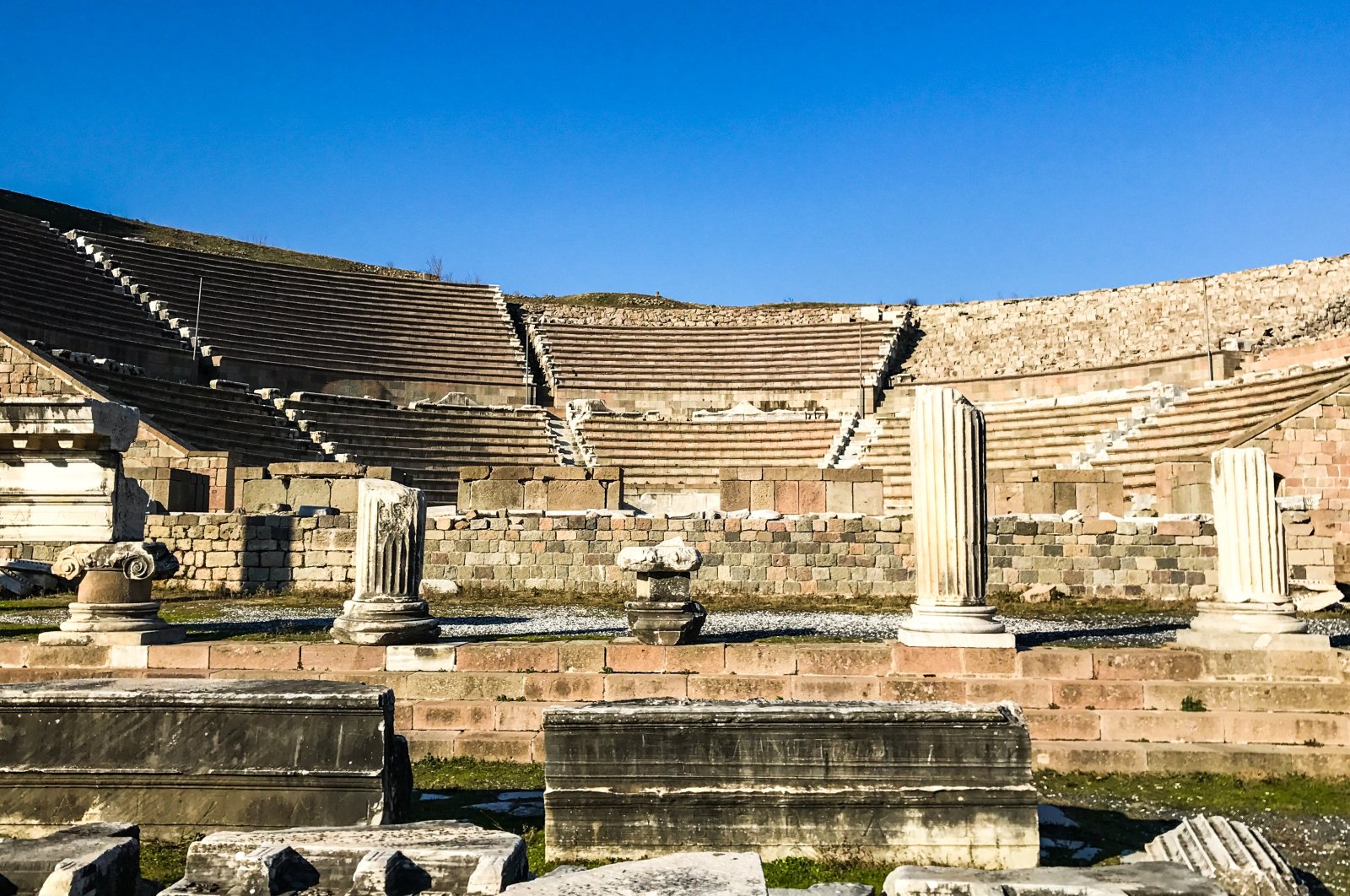 Anatolia abounds with historical sites and natural wonders. Some are known worldwide while many others await discovery. This week in this seven-part series, we'll explore a place shadowed by the better-known Acropolis of Pergamon, a prominent health and wellness retreat of antiquity

I have been to Bergama several times, yet this quintessential Aegean town never ceases to surprise me with its astounding array of attractions. Despite being only a midsized settlement, exploring Bergama thoroughly would easily take more than a couple of days. I get plenty of positive feedback from my friends, both foreign and Turkish, that shows that the prime historical spot of the district, the Acropolis of Pergamon, gets plenty of visitors – and deservingly so. However, allow me to draw your attention to another ancient spot which is grossly underrated: Asklepion, a historical oasis of Western Anatolia, which served the ancients as a health, treatment and spa retreat. If you're ready, then let’s take a peek at what it beholds!

Getting to Bergama by public transportation

Since Bergama is one of the biggest districts of Izmir, from central Izmir and surrounding towns, regular public transportation is provided and one can find the bus and minibus schedules easily online. However, once you arrive at Bergama, you will have to walk 20 to 30 minutes to get to Asklepion.

Start the day with a pleasant Turkish breakfast

A great start to a busy day is a substantial Turkish breakfast. The itinerary I plotted out would require a lot of energy, so first, to add a different flavor to your trip and boost your energy, I recommend you sit for a morning bite at the Bereket Kahvaltı Salonu, which is among the top breakfast cafes not just in Bergama but in the whole of Turkey.

This hole-in-the-wall is owned and run by Ibrahim Usta, a 74-year-old who has been in the breakfast business since he was 12. I was delighted to see him still making his own butter, clotted cream (kaymak), cheese and many other dairy products. What makes this place stand out is that everything served here is organic. I had a delicious breakfast that came served with fresh, warm milk and crispy bread, all of it highly recommended. Please note that Bereket Kahvaltı Salonu is closed on Sundays.

Before heading to Asklepion

Located a short walking distance from the Bereket Kahvaltı Salonu, you will find the Museum of Bergama greatly informative about the history of the region, other significant spots in Bergama, ongoing archeological excavations and the Asklepion retreat. Moreover, you will get the chance to examine various artifacts excavated from the site, offering a preliminary insight into practices of the time. The Museum of Bergama is open every day and can be accessed for just TL 10 (around $1.40) – but is free to enter with a Museum Card (easily purchased from almost every museum in Turkey, offering free entrance to all sites that are protected by the Ministry of Culture and Tourism).

From downtown Bergama, it might seem incredibly tedious to reach Asklepion. My advice is to forgo your sat-nav, as this will take you along some very narrow, patchy routes. As long as you follow the signposts from central Bergama, you will manage to get there via a proper asphalt road.

Upon reaching Asklepion, you’ll have to park your vehicle in the parking lot for visitors.

There is a fee of TL 10 for parking, while entrance to Asklepion costs TL 45 (but is also free with a Museum Card). According to information provided by the Culture and Tourism Ministry, Asklepion is open every day and its visiting hours during the summer season (from April 1 to Oct. 1) range from 10 a.m. to 7 p.m., while in winter (from Oct. 1 to April 1), they range from 8:30 a.m. to 5:30 p.m.

A brief history of Asklepion

It is believed that Asklepion was founded in the fourth century B.C during the Hellenistic era in honor of the Greco-Roman god of medicine, Asclepius. Due to the various treatments it offered, which were unprecedented to people back in those days, as well as its exceptional architecture, Asklepion was one of the most popular healing centers in the ancient world.

Although the first structures were established back in the fourth century B.C, the ruins we see in Asklepion today date from the A.D. second century, when the Roman Emperor Hadrian was in power. Many people, including destitute patients who were in need of medical assistance, arrived in Asklepion for treatment.

The land on which Asklepion was built is a small fertile valley at the foot of Mount Geyikli, which stands northeast of Bergama. The natural springs surrounding the valley were seen as sacred and thought to possess healing powers.

According to legend, Asklepion was founded by Archias, a native of Pergamon (modern-day Bergama), who suffered a foot injury while hunting. He was subsequently taken to Epidaurus (modern-day Argolis, Greece), which was among the best healing centers in ancient Greece. After he recovered, to show his gratitude, Archias founded the cult of Asclepios, the god of medicine, in Pergamon.

Myth of the stone and the snakes

One very interesting artifact you will come across, both in the museum and in Asklepion, is a stone depicting a serpent entwined around a staff or a rod. You may recognize this as the universal symbol of medicine. The origins of this symbol are the source of much debate. The most popular origin myth has a few variations, depending on the source, but they more or less follow a similar storyline.

As detailed in the museum, the myth involves a patient who was admitted to Asklepion but was unable to be treated and close to death. He was taken to the entrance of the healing temple by the prominent Greek physician Galen and was left to be picked up by relatives. While waiting, the patient saw two snakes drink milk and regurgitate it into the same bowl. The desperate patient approached the bowl and drank the poisonous milk, hoping to end his pain and die. The patient promptly fell asleep, and much to everyone’s shock, by the time he awoke, he was fully recovered. Nonvenomous snakes were fairly common in Asklepion, and they were thought to bring luck to ill patients.

Galen subsequently ordered the construction of a column with the now-famous symbol to honor Asclepius, the god of health. One can find the column today at the end of Via Tecta.

The information we have about ancient treatments has been chiefly acquired from the A.D. second-century Greek author and orator Aelius Aristides.

Via Tecta (main path to the sanctuary)

Patients used to enter Asklepion Sanctuary through a long, paved road covered with a colonnaded canopy. A library with many works about the medicine and a temple dedicated to Zeus could be found along the Via Tecta.

The ancient theater of Asklepion is on the right side at the end of the paved road. In its golden age in the second century B.C., this theater could seat up to 3,500 people.

The seats are still quite intact, and the top seating row of the theater offers a picturesque view of Asklepion Sanctuary. A colonnaded street (different from the one mentioned above), can be found right in front of the theater, and there are many huge cut stones and marble blocks emblazoned with ancient Greek carvings.

The fountain and the ponds

Near the theater, there is a fountain flowing with water, which was believed to have healing powers. Upon consulting a security guard, I found out the water gushed forth from underground sources. I cooled myself down with a splash of the ice-cold water and continued my tour. Don’t try drinking this, however, it is not safe for consumption.

Small ponds are scattered around the southwest lawn of the sanctuary. These ancient pools are now mostly covered with algae. I felt quite delighted to see that many turtles, frogs and even a water snake call these ponds home.

Following the fountain, you will find a very long underground tunnel that has remained intact since it was in active use – not a single stone has been displaced throughout the centuries.

This tunnel connects the colonnaded street near the theater to a circular treatment center that stands on the southern part of the sanctuary. Here, the remains of the dorm rooms and the other halls where patients used to receive treatment can be found. For me, this spot was the most mysterious and intriguing part of the tour.

What else to see?

Aside from the Asklepion, other notable sites in Bergama that should not be missed include places like the Pergamon Acropolis, the Basilica (also known as the Red Courtyard), Hacı Hekim Baths, the Seljuk Minaret, Bergama Ulu Mosque and Şadırvan Mosque.

I highly recommend that you add Bergama and its historical sites to your travel itinerary. This town may be small, but it’s packed full of very unique history and ancient wonders. It was an important town in antiquity, and the proof of that lies in the beauty and vastness of Asklepion and other sites.