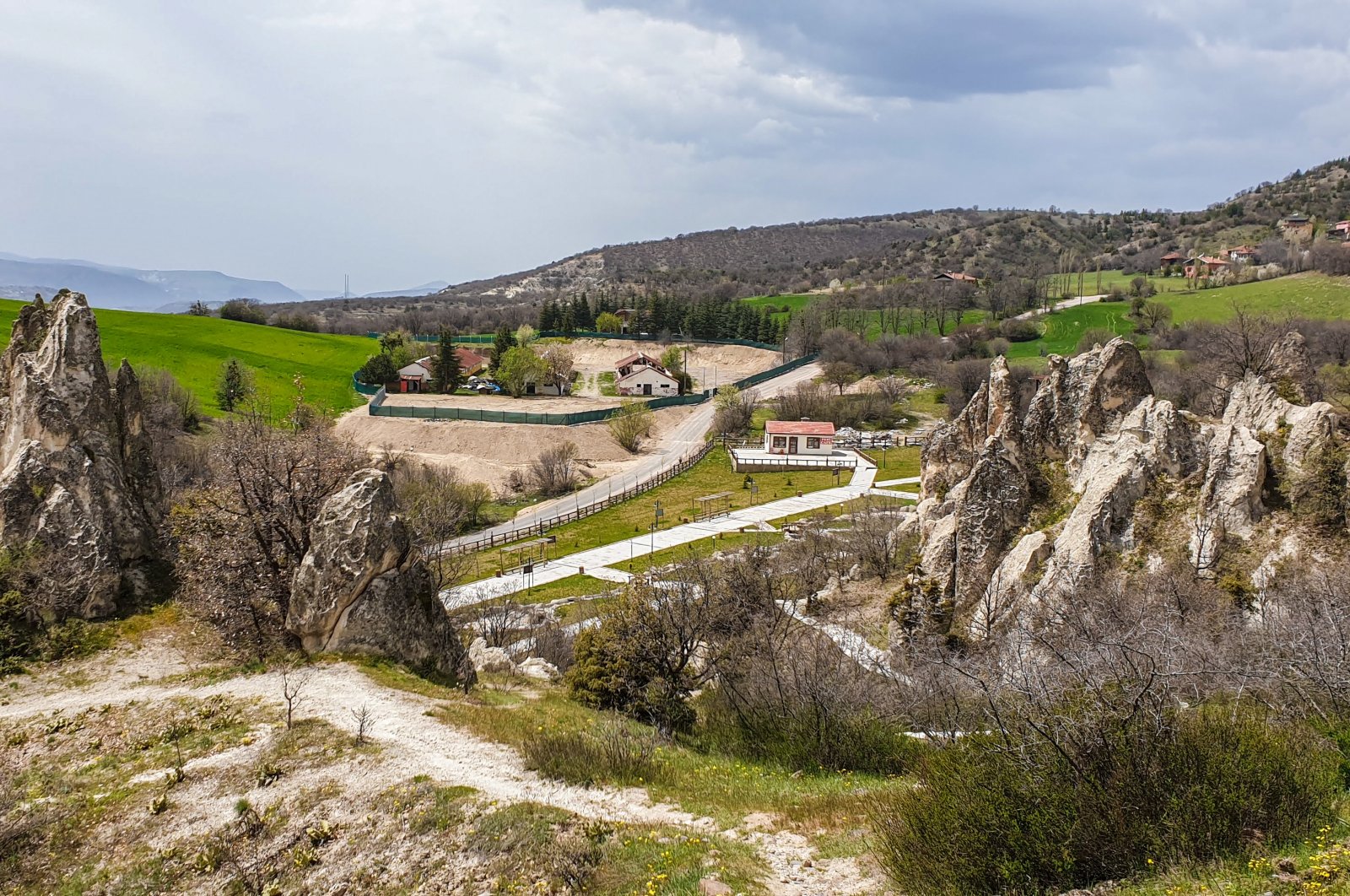 The Abacı fairy chimneys may not be as large as those in Nevşehir but are intriguing nonetheless. (Photo by Argun Konuk)
by Argun Konuk Oct 16, 2020 10:10 am
Edited By Yasemin Nicola Sakay

Unfairly thought of as a boring and dull city with limited attractions and activities, Ankara is often cast in a negative light, especially when compared to Istanbul and other tourism hot spots. This week we’ll be exploring Mahkemeağcin village and its surroundings

Kızılcahamam is one of Ankara’s 25 main districts. Located in the north of Ankara, it offers one of the most diverse flora and fauna in Central Anatolia. Kızılcahamam is chiefly known for Soğuksu National Park, which is a preferred spot for locals from Ankara and surrounding cities for nature walks, barbecuing and bird watching. Apart from that, many local and foreign tourists visit Kızılcıhamam for its famous hot springs with medicinal properties that have been in use since the Roman period.

In addition, Kızılcahamam embodies various historical attractions such as castles, monasteries, shrines, fairy chimneys and much more. Recently, I took a day-trip to Kızılcahamam to see many of these hidden gems that I had spotted on Google Maps. Once more, I marveled at how underrated Ankara’s attractions are. Today, we will be focusing on these less popular charms of this small, yet historically rich vicinity.

Let’s commence our trip to Kızılcahamam’s off-the-beaten-path sites: the underground city of Mahkemeağcin and its rock churches, the fairy chimneys of Abacı and the hillside monastery of Alicin.

Mahkemeağcin, a small and quiet village in suburban Kızılcahamam, was the first stop on my itinerary. This small village abuts an enormous boulder which comprises of dozens of caves, churches, houses and a wine cellar in a small-sized underground city that was presumably built in either Roman or Byzantine times. Besides these ancient rock-carved structures, you’ll find many cisterns, granaries and caves among the houses in the village.

When I parked my vehicle at the small village square, I headed directly to the underground city and complexes carved inside the massive boulder. I was amazed by the integrity of the structures and the level of preservation of crosses and ornaments carved into the walls.

There are two accounts on when and by whom the Mahkemeağcin underground city was founded. While some report that it was built by the Byzantines between the seventh and eighth centuries A.D., others suggest it was the early Christians who sought refuge there from the prosecution of the Romans.

As I was roaming around the ruins, I noticed an old lady who was looking at me from her yard. I saluted her and asked about the underground city and other ancient structures. Here’s what Emine Teyze said:

“Before the archaeologists and tourists found out about the old ruins, we had used them as storage. A couple of years ago, they came from the municipality and cleaned out the churches and other old rooms. Ever since, some people come to see them, but frankly, not that many people visit our village.”

Moreover, don’t leave Mahkemeağcin village without seeing the İndibi rock graves, which are located on a hill that is 1 kilometer (0.62 of a mile) away from the village square. To get there, follow the dirt road leading northwest from the village and park your car once you see the grave rooms to your left. At this point, you must take a 10-minute walk to reach the graves. You can decide if it is worth walking all the way up to the graves. Personally, I felt pretty content looking and photographing them from afar.

Would you believe that Kızılcahamam boasts its own mini-Cappadocia? It was hard for me to believe the diversity of nature in Kızılcahamam. The second stop of my route was the Abacı Fairy Chimneys (also called the Cappadocia of Ankara), which are a group of dozens of fairy chimneys resembling the world-famous ones in Cappadocia.

Quite unpopular due to its remoteness, the Abacı Fairy Chimneys were a tranquil place to visit and no less spectacular than those in Nevşehir. Think of it as Cappadocia but reserved for you. I spent a good hour here, taking plenty of photos, exploring every inch of the fairy chimneys and watching the mesmerizing scenery from the observation deck.

From Mahkemeağcin village, it is a five-minute drive to the Abacı Fairy Chimneys, and the road is scattered with mysterious manmade caves. There is no entrance fee, and visitors can safely park their vehicles in the parking lot.

Roadside caves between the village and fairy chimneys

On my way to the fairy chimneys, I noticed a group of caves on the left side of the road. I grew curious and pulled over to explore the caves.

As I set foot into the cave complex, a group of startled sparrows abruptly emerged from their nests and flew away. It was pleasant to see that in the absence of humans, many animals, including carnivorous birds like eagles and vultures, had made a home in these caves. After examining the carvings on the walls in these caves, I left so as to not disturb the residents of these caves further.

The day’s final destination was the unreachable Alicin Monastery, also called “Mini Sümela” on account of its resemblance to Sümela Monastery in Trabzon.

The Alicin Monastery is located 21 kilometers away (a 25-minute drive) from the Abacı Fairy Chimneys. It is a mountaintop monastery that is thought to have been built in the Roman era. Unfortunately, due to a lack of archaeological excavations and research on the area, information about the history of these ancient structures has not yet been gathered, and what we do know is not very elaborate.

A local tale suggests that the monastery is actually a mountain abode that was built by the bandit leader, Cin Ali, who lived in the second half of the 19th century. According to the story, Cin Ali lived in the valley where the monastery is located and used this structure as a safehouse. However, this is no more than a local myth.

The moment I discerned the structure of the monastery amongst the hills, I was both happy and disappointed. The feeling of discovering a historical site skyrocketed my excitement, but at the same time, I was left disappointed after coming into the realization that it is pretty impossible to climb up. The road leading to the monastery is in decent condition. However, after the signboard indicating that the monastery is 3 kilometers away, the road gets noticeably rough. As long as you drive carefully and slowly, you will not face any issues.

I took a chance and tried to climb up to the monastery. It wasn’t too long before I accepted my defeat and decided to be content with witnessing the beauty of the monastery and taking photos of it from the foothill. Unless you are a professional climber, it is a highly perilous climb. There is a point till which a path leads you to a small flat ground. But I urge you not to go forward on account of the dangers that you might face.

An important tip for reaching the Alicin Monastery is not to use navigation. I made that mistake and ended up in a village at the edge of the cliff underneath where the monastery is situated.

I certainly did not expect Kızılcahamam to amaze me to this extent. This highly overlooked district is one of the richest areas in Ankara in terms of historical sites and natural wonders. With the restrictions from the COVID-19 pandemic not abating anytime soon, Kızılcahamam can be a safe and interesting spot to visit during times when staying away from crowds is our top concern.