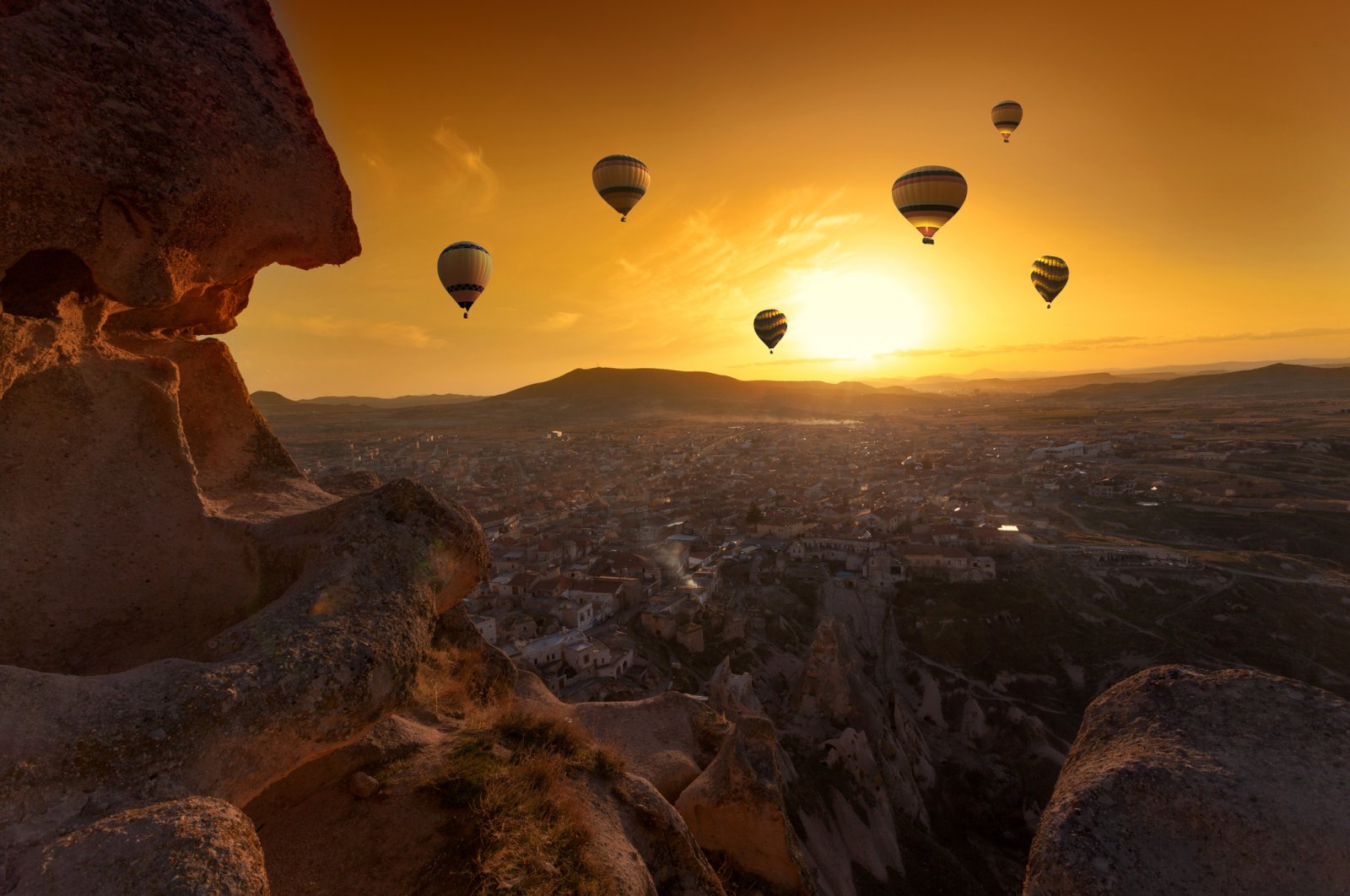 The Cappadocia valley is truly breathtaking at sunset. (iStock Photo)
by Elissa Carlson May 15, 2020 12:50 pm

Ever wonder what it would be like to live in a cave for a night or to wake up to the sun rising above fairy chimneys like those that inhabited the region since the Paleolithic era? Well, grab your imagination and travel with us to one of the most magical places on UNESCO’s World Heritage Site list: Göreme National Park and the Rock Sites of Cappadocia

Covered in fairy chimneys, Byzantine art and rock churches, this week’s UNESCO World Heritage Site of Turkey takes us into the whimsical and mysterious region in the central Anatolian plateaus where you can get lost in the history and beauty of Göreme National Park and the Rock Sites of Cappadocia.

We have already seen the social media posts of travel bloggers and amateurs alike creating the picture-perfect shot at sunrise in Cappadocia amidst the dry, rugged rocks and bright, colorful hot air balloons in the sky. But this region has a much richer and longer history than the Instagram fame it has gathered over the past several years.

The region’s history begins at the eruption of a series of volcanoes that include Mount Erciyes and Hasan that sculpted, along with air and rain, the unique, unworldly looking landscape filled with mountain ridges, valleys and pinnacles known as “fairy chimneys” that stretch as high as 40 meters (130 feet) up in the sky. When the volcanoes erupted and spread their thick ash across this region, the ash turned into soft rock that solidified and became tens of meters thick. From that soft rock, otherwise known as tuff, the wind and rain of millions of years crafted the ever beautiful rock formations of Cappadocia.

Nature isn’t the only contributor to the beauty of the region. Since the Paleolithic era, Cappadocia has been an area popular for settlers due to its natural geological security features that kept civilizations protected from outside forces. This area witnessed the beginnings of Anatolian cultural history, including Christian civilizations and monastic activity that can be dated back to the fourth century. Early Christians who were fleeing Roman persecution flocked to the caves here and set up intricate monastic communities. The traces of a plethora of churches, troglodyte villages and cities hidden within the rock formations make it the world’s largest urbanized cave complex and showcases the masterpieces from the intelligent minds of early human civilization.

Aside from its structural glory, Göreme National Park and the Rock Sites of Cappadocia also host the glorious Byzantine art specific to the region. The decor found on the walls inside rock caves, presumed to once be churches, is one of the leading examples of artwork from the Byzantines in the post-iconoclastic period. Not only does the incomparable beauty of the art give the region an exquisite charm, but the history and significance of it give us clues into the life and rituals of the people who settled among the mushroom-shaped, fairy chimneys of Cappadocia.

Although an important part of the world history for centuries, the 9,614 hectares (37.1 square miles) of Göreme National Park and the Rock Sites of Cappadocia were declared a UNESCO World Heritage Site in 1985 and includes seven key parts of the area: Göreme National Park, Derinkuyu Underground City, Kaymakli Underground City, Karlik Church, Theodore Church, Karain Columbaria and Soğanlı Archaeological Site. Since then Cappadocia has been a popular place for tourism due to its historical mysteries and unworldly appeal.

While many of Göreme’s troglodyte dwellings are now protected museums, you can still find some that are fully functioning homes and hotels. This is one of the features that make this area popular among tourists looking for an out-of-this-world experience. This past year, Cappadocia reached a record number of tourists, welcoming some 3.8 million visitors in 2019 alone. It is no secret that after the threat of the pandemic dissipates, tourists from around the world will flock back to this region to discover the mysteries and wonders it has to offer. Although a great contribution to Turkey’s successful tourism industry, floods of tourists also come with its downsides for this World Heritage Site. Due to the high demand for tourism, many ancient sites that were presumed to be intact for ages, are now facing severe damage and modern revitalization, although UNESCO continues to try and protect the area so that it can survive for another millennium.

There is a clear reason for the large number of tourists returning year after year to the fairy chimneys of Cappadocia – and that can only be described by the magical experiences people have when visiting. The history alone brings the past to the present, as you learn of the early civilizations that settled in the rock caves and are able to imagine what life was like walking through the dusty paths of Göreme National Park. But it is not only the history that brings people here time after time again. The “moonscape” features give visitors an otherworldly experience and although it is unlikely any of us will be able to travel to another planet during our lifetime, it seems like the natural features of Cappadocia can give us that feeling of being outside Earth without ever leaving the borders of Turkey.

No matter what you come to Cappadocia for, there is no doubt that your visit will bring you a wide array of adventures to choose from. Activities such as hot air balloon rides at sunrise, sleeping in one of the infamous hotel caves, exploring the underground city of Derinkuyu or taking in the beauty of each sunset and sunrise with a cup of Turkish tea, will keep you on your toes throughout your visit. All year-round, there are tour groups that can arrange the entire experience for you, from arrival to departure, but if you are looking for an unscheduled, spontaneous adventure, the region is also easily accessible by plane or bus from all major cities in Turkey and can be discovered all on your own.

If you have the chance, pack your bags and make your first stop after the pandemic ends to Göreme National Park and the Rock Sites of Cappadocia for an unforgettable and fairytale experience.