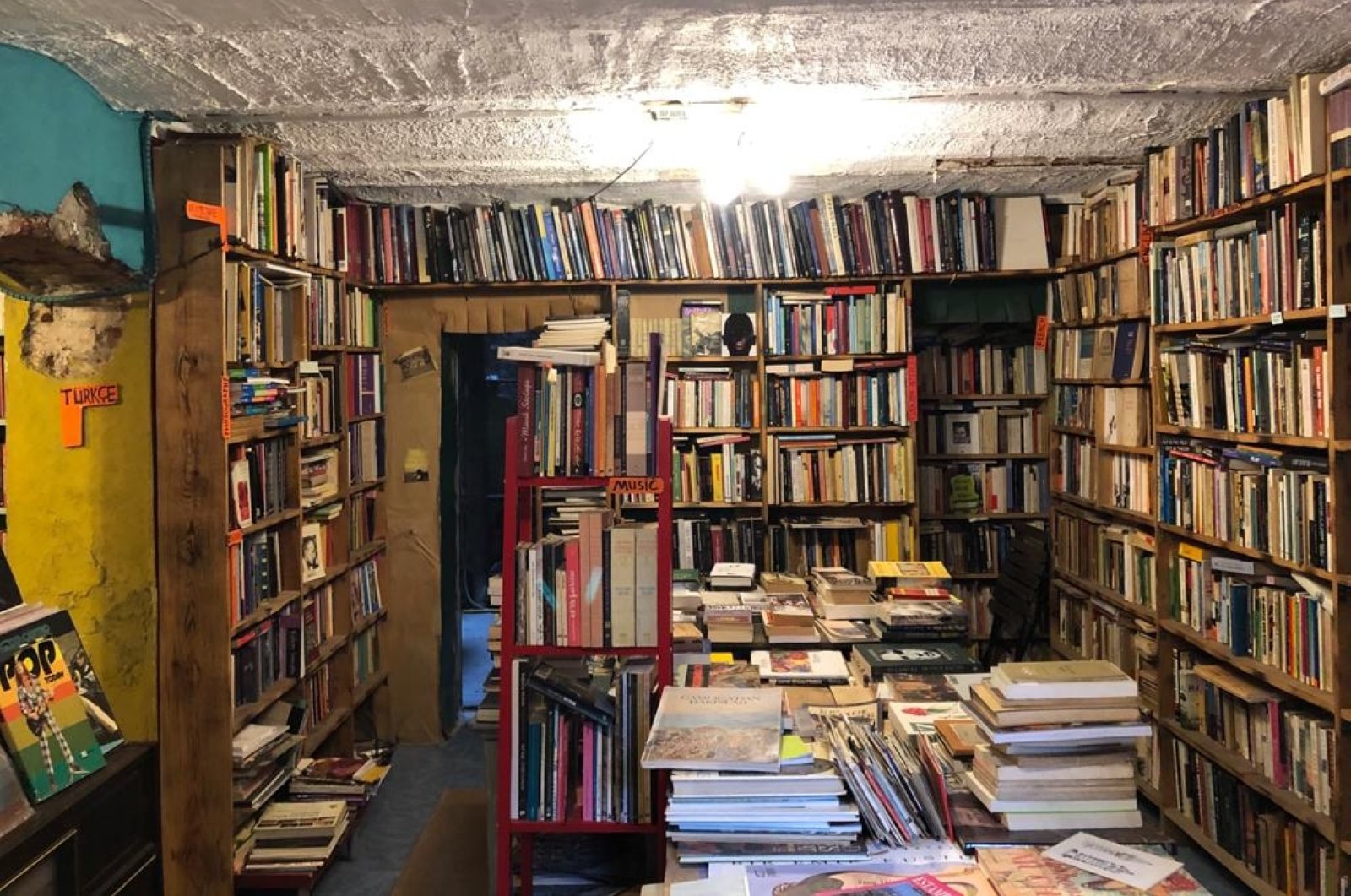 The interior of Fahrenheit 451 Recycling Store is inviting and colorful in the bustling Galata neighborhood in Istanbul. (Photo by Matt Hanson)
by Matt Hanson
Sep 30, 2020 12:25 pm

The bookseller Cuma is a calm, old soul on a back alley in Galata. His secondhand bookshop, or sahaf, Fahrenheit 451 Recycling Store sells an impressive range of multilingual volumes, turning passersby into literati

While winding down the storied Yüksek Kaldırım Avenue (which roughly translates to "steep road," and lives up to its title), as it twists and descends alongside Galata Tower, I peruse the tantalizing variety of musical instrument boutiques and often wander where some outlets also craft Black Sea fiddles and saz folk guitars. Around a smooth corner dotted with cafes by Şahkulu Street, I like to visit an affable, though reserved bookseller named Cuma, at his sahaf, or secondhand bookshop, which he curiously calls Fahrenheit 451 Recycling Store.

The cool basement spot is a witty nod to the theme of the classic 1953 novel, "Fahrenheit 451" by Ray Bradbury in which canonical works of literature are preserved from book-burning authorities by a community who recite them aloud by heart in a nature hideout. Fahrenheit 451 Recycling Store houses a trove of textual gems, spanning a hearty slice of the globe’s breadth of publishing and thought down the ages. Cuma is as affable as he is withdrawn, yet delights in impromptu conversations about art, writing and life.

As much as his patrons come to survey his ever-surprising stock of faded spines, bound leaves and worn hardcovers, I am equally happy to greet Cuma, as he seems to appreciate every opportunity to connect with mutual friends and bookworm regulars out to voice their latest whimsies of daily reflection or, in the case of foreigners, their smatterings of Turkish. Cuma speaks English softly, slowly and carefully but enjoys all the more to exchange pleasantries in Turkish even if in response to heavily accented, slight, broken attempts.

That said, his penchant for small talk, tete-a-tete, is eclipsed by the grandiose scope of impassioned dialectic and imaginative storytelling that grace his shelves. After all, Cuma and the few sorts able to squeeze into his humble place of business, perhaps no more at a time than can be counted on one hand, are just small, world-weary individuals, navigating the inner-city humdrum for some magic of insight that might leap from the lines of a dusty paragraph and speak the truth.

Tastefully decorated with potted plants, and before an entry painted in vibrant stripes of sky blue, brick red and turmeric yellow, the cellar door is inviting, as its dank air soothes overheated amblers in need of the grounding shade of a stone-walled interior. On either side, books aplenty bloom up, as from the cobblestoned alleyway. One quirky box is labeled “Try a Blind Date with a Book” and holds empty notepads beside the reason for its alluring display, paperbacks wrapped in newspaper, each inscribed with colorful descriptions of the mysterious narratives that wait for the more uninhibited and exploratory of silent listeners.

One book, enclosed in opaque brown construction paper, is intriguingly itemized as by an English author, a collection of short stories set or written in the 19th century that “will make your blood freeze.” Yet another, enveloped in white paper, is a “magnificent and lavish story” of Russian royalty in the far north, featuring characters “with a revolutionary soul and a simple, village man yearning for more.” The blurbs are priceless, teasing deep-rooted interest with a subtle, calculated effect out of footsore urbanites and sightseers with short attention spans.

Immediately, even by a sideways glance, the outdoor shelves are furnished to catch the eyes of nationals and expatriates alike, with stories and studies by famous modern authors like Jean Paul Sartre, whose work, “The Communists and Peace” may continue to galvanize young minds into politicized, existentialist Francophiles, or by the globally renowned American playwright Arthur Miller, whose Brooklynite love letter, “A View from the Bridge,” still fires the soul of working-class intellectual thespians.

Cuma hosts a peculiarly idiosyncratic, yet familiar collection of collectibles that make up the inner world of the sahaf, exhibiting the staple vintage typewriter, for example, next to obscure and cult references to lesser-known literary histories. A cubby beside the door is open, with its fragmented brick background, for all to see an enlightened hoard of printed material in dialogue with the greater cultural sphere in which Istanbul’s core has been situated for the better part of the millennium. Firstly, Jason Goodwin’s singular scholarship on Ottoman history, “Lords of the Horizons,” lays beside Orhan Pamuk’s novel, “Snow,” for an obvious local focus.

But from there, Fahrenheit 451 Recycling Store then transports seers and bibliophiles into a venture through the intellectual landscape of Turkish literacy. A rare English translation of a science fiction detective novel by the Polish writer Stanislaw Lem, “The Chain of Chance,” together with the philosophical journal publication, “Nihilism Today,” makes for an especially invigorating cognitive fusion beside a hardcover copy of a Slavoj Zizek treatise in Cyrillic script under the illustrated fantasy magazine, “Heavy Metal.”

I am as excited about different editions of books as I am about the books themselves, as it reveals an essential aspect of publishing, that being the editorial history of reading. Fahrenheit 451 Recycling Store has a special section dedicated to English books that are either or both first editions or signed. Among the titles in the secure care of Cuma is an ample sampling of gilded, perennial issues of the English polymath Aldous Huxley, who transformed the art of fiction into experiments in social philosophy.

"Brave New World" and many of Huxley’s other timeless works are acquirable at Fahrenheit 451 Recycling Store, beautifully illustrated by Heron Books, or in a stellar imprint by Chatto & Windus, rightly immortalizing the humanist luminary. With respect to the criticism of Huxley, veritable books within books, so the sahaf is a fine resource from which to embark into broader avenues of amateur scholarship. For that, I came across, “Books on Turkey,” issued by Pandora, which details a wildly comprehensive list of titles.

What is even more striking, however, is that Cuma trades in treasuries of art history, with quite specific regional significance. A large-format coffee table book, “Jewish Art,” edited by British historian Cecil Roth offers a scintillating parallel to the idea of Islamic art when it comes to a shared, Semitic religious heritage of calligraphic and sculptural creativity in contrast to the mainstream aesthetic traditions of Western globalization that have stemmed from European painting.

Finally, I was pleasantly gripped by the discovery of a series of tracts by the artist and academic Ipek Duben, who, together with Istanbul Bilgi University Press, published a groundbreaking commentary on the history of Turkish art and its criticism, spanning its early beginnings from 1880 to 1950, and as co-editor on an overview of Turkish contemporary art in the 1980s. Nearly 80 years old, Duben recently had a solo show of her art at Pi Artworks in Karaköy. That her writing is at Fahrenheit 451 Recycling Store equally proves the enduring relevance of her work and that of the sahaf.