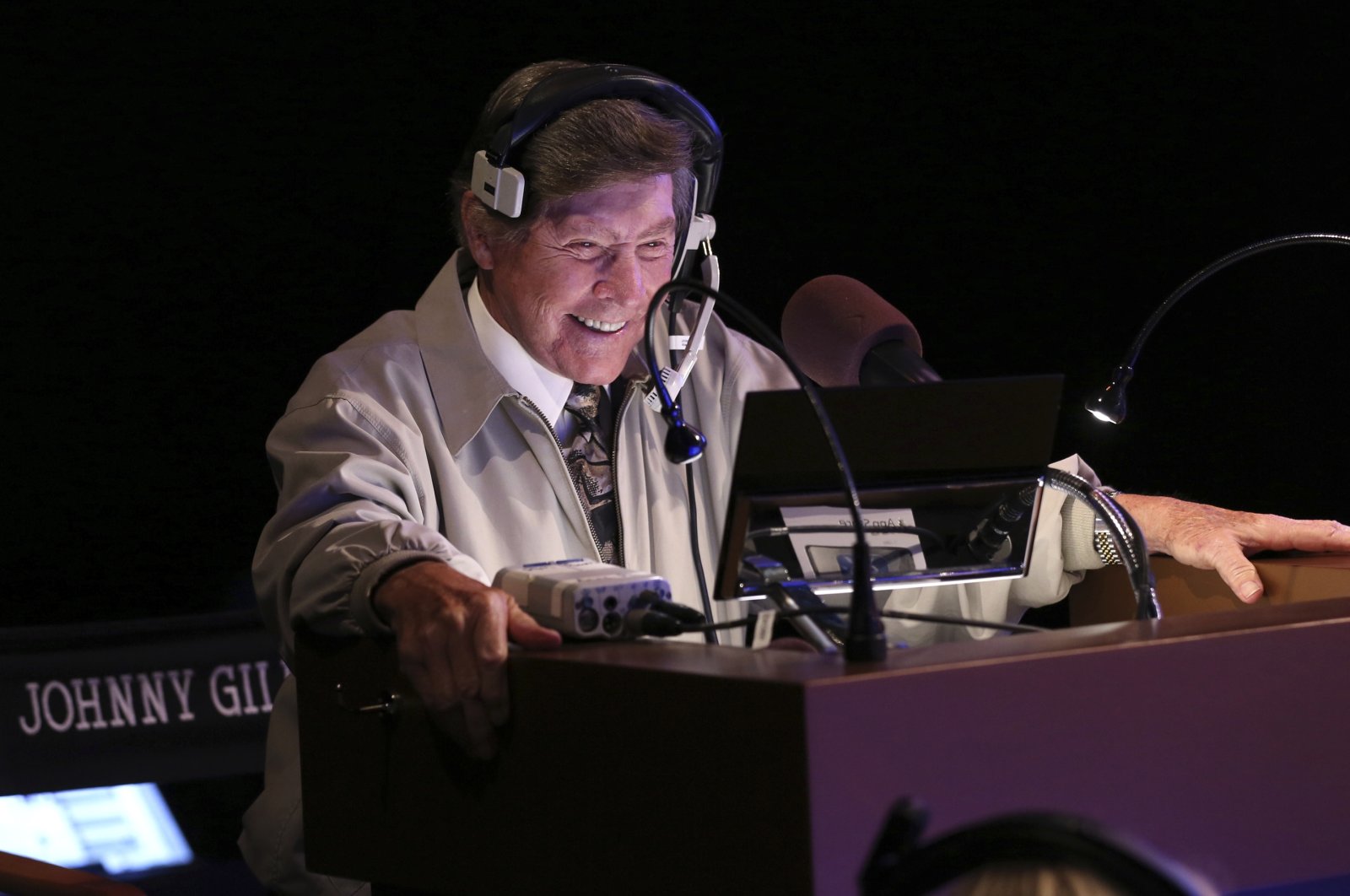 In this image provided by Jeopardy Productions, Inc., show announcer Johnny Gilbert appears on the set of "Jeopardy!" Gilbert worked with host Alex Trebek for 37 years and was reluctant to continue after losing his admired colleague. But others with the show urged him to consider his role as a comforting touchstone for viewers who also were in mourning. (Carol Kaelson/Jeopardy Productions, Inc. via AP)
by ASSOCIATED PRESS Jun 03, 2021 11:50 pm
RECOMMENDED

Arguably one of the most recognizable voices in television game shows over the past several decades, Johnny Gilbert, who decided to stick with “Jeopardy!” after Alex Trebek’s death, now has to look forward to adjusting to the show's yet-to-be-named host.

“It’s not easy for me because I worked with Alex for 37 years, and I never thought of anybody replacing him,” he said. “Nobody can do it like he did it, you know.”

No one does it like Gilbert either, who at age 92 has decided he is not ready to call it quits on the show business career he began pursuing as a teenager.

Last year, when he was reluctant to continue after losing his admired and longtime colleague, others with the show urged Gilbert to consider his role as a comforting touchstone for viewers who also were in mourning for Trebek.

“If you just listen to the way Johnny articulates each name, each word, he has a voice and even more importantly, delivery, unlike anyone else,” said Mike Richards, the show’s executive producer. Without Trebek, “the fact we can still rely on Johnny is obviously very important to us as well.”

“This is ‘Jeopardy!’” is Gilbert’s richly booming introduction that opens each episode and belies his years. In turn, he’s acknowledged with thanks from the host and, occasionally, has been shown at an otherwise off-camera stage perch.

During the pandemic, he’s been taping his contributions remotely from the Los Angeles-area home he shares with his wife, Sheree Gilbert. They’ve been together for several more years than his “Jeopardy!” stint, the sort of marital and career longevity that's rare in Hollywood.

Born near Roanoke, Virginia, and raised in the coastal city of Newport News, Gilbert had something different in mind when he first dreamed of being an entertainer — singing — and his parents supported their only child's aspirations.

“I started taking voice lessons when I was still in high school, got a job with a little band and traveled around in that area for a while,” he said. “That was the beginning of it all.”

A winding path followed, one with bumps and byways that included military service, but Gilbert wasn't to be deterred. His advantages, besides an impressive vocal range: determination and a willingness to adapt to the work at hand.

He was 18 when a newspaper want-ad for a band singer sent him to Jacksonville, Florida. Turned out the act had already hit the road but instead of backtracking home, he searched out a local talent manager.

A club on the outskirts of town was looking for an emcee, the manager told Gilbert, who had to admit he was unfamiliar with the term. Master of ceremonies, explained the manager, who was undaunted when Gilbert said he had no experience.

“He taught me how to introduce people on the stage and take them off the stage," he recalled. He got the job and the opportunity to sing with the club band, a gig that lasted for about six weeks and set the pattern for his fledgling career.

It was America in the 1950s, dotted with nightclubs and supper clubs, and Gilbert made the most of the opportunities. He started in the southern U.S. and worked “my way all across the country,” he said.

The draft interrupted his career but not his stage work: Gilbert's talent was noticed and he was assigned to a U.S. Army special services entertainment unit in Germany.

He was back on the nightclub circuit post-service when an agent suggested to a delighted Gilbert that he give television a try. He started in New York with game shows including “Music Bingo," then moved to LA to host “Beat the Odds” and back again to New York as work dictated.

Among his many other TV credits are “The Joker's Wild,” Dinah Shore's talk show “Dinah!” and “The $25,000 Pyramid.” Then the syndicated version of former network series “Jeopardy!” beckoned in 1984, with both co-creator Merv Griffin and Trebek in his corner, Gilbert said.

Gilbert expressed reservations about whether the Sony Pictures Television series would bring him back when taping resumes in late July or early August for season 38. He's served as warm-up host for the studio audience as well as the show's announcer.

“I’m not as young as I used to be,” Gilbert said. But there is a tradition of longevity in the field, including the late Don Pardo of “Saturday Night Live.” He was the show's voice for 38 seasons until his 2014 retirement at age 96.

“Jeopardy!” producer Richards, who'd stepped in as the show’s first fill-in host, quickly brushed aside the notion that Gilbert's tenure was in anyone's hands but his own.