Jolie pays a surprise visit to Syrian children in Lebanon 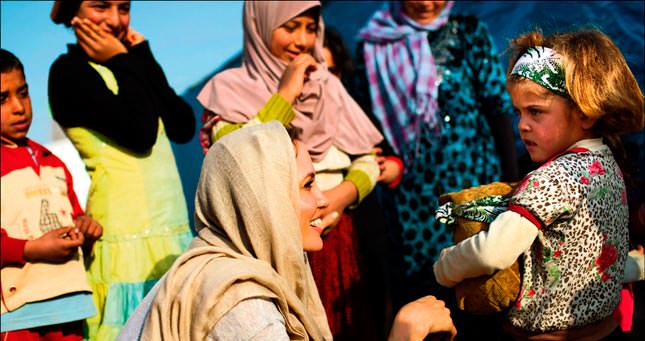 During her three-day visit, Jolie visited unaccompanied children living in the eastern Bekaa Valley, where many of the poorest Syrian refugees in Lebanon reside. The 3,500 children are those who were orphaned or separated from their families as they fled into Lebanon. They are a part of the nearly onethird of all Syrians who have been displaced from their homes since an uprising against President Bashar
Assad began in March 2011. About 2.5 million Syrians have become refugees since 2011.

Some 4.2 million are displaced within Syria, the U.N. estimates. "Meeting these children was a heart-rending experience," said Jolie in a statement issued via the U.N. "They have lost their families and their childhood has been hijacked by war. They are so young, yet they are bearing the burden of their reality as if they are adults."

The small Mediterranean country of Lebanon, which neighbors Syria, has absorbed nearly 1 million refugees, swelling the country's population by one-fifth. The concentrated numbers of refugees have overwhelmed Lebanon's infrastructure, raised rents and flooded the public health and education systems throughout the country. The poorest refugees huddle in tents made out of old billboard advertisements on land they rent out from farmers in the Bekaa Valley. The shelters offer little against the country's bitter winters and hot summers.

Parents of thousands of Syrian children have pulled them out of schools because they cannot afford the modest Lebanese school fees or because they need them to work, often as shoe shiners and car cleaners.
During her visit, Jolie called on the international community to ensure the implementation of a recent U.N. resolution that called for humanitarian assistance to reach Syrian civilians.

In the statement, Jolie described the resolution as a long overdue step. "The generosity and solidarity shown by Lebanon and Lebanese to its neighbor serves as an example to the world for which we should all be grateful.
We all need to help them bear this burden,"
Jolie said.

The Hollywood actress also met with Lebanese Prime Minister Tammam Salam in Beirut. Salam, known as bold political figure in the country, has recently featured strongly in global headlines for forming the Lebanese cabinet after a 10-month stalemate.
In April 2012, the UNHCR promoted Jolie from serving as its goodwill ambassador to special envoy. The Hollywood actress has previously visited Jordan's Zaatari camp, which is home to more than 185,000 Syrian refugees.

Apart from Lebanon and other countries neighboring Syria, Turkey has accepted about 400,000 Syrian refugees, in an "unflashy, unsentimental, uncomplaining way," as described by the U.K. daily the Telegraph.

Many Syrians live in camps which were first established in July 2011, immediately after the siege of Deraa, Homs and Hama, while others have been taken in by Turkish families and receive assistance from various charities.