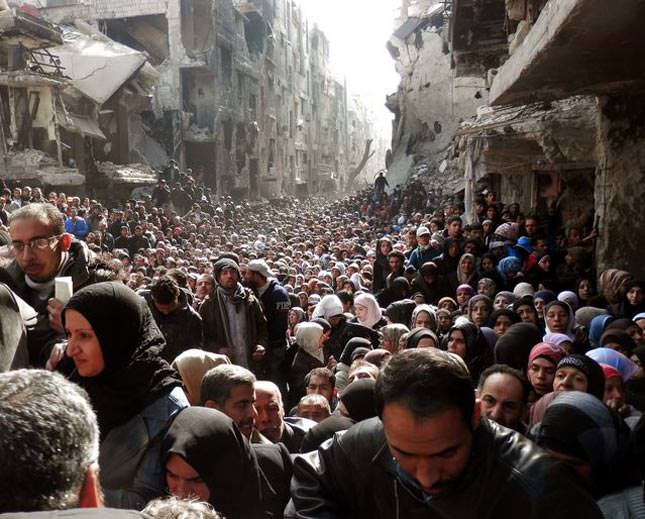 by Feb 28, 2014 12:00 am
Residents of Yarmuk Palestinian refugee camp near Damascus crowd in a destroyed street as food is distributed by the United Nation Relief and Works Agency (UNRWA). Local activist Rami al-Sayed said for the past year there was no electricity in the camp destroyed by the Assad regime, and due to lack of supplies, hospitals and bakeries were closed.

According to Anatolian Agency (AA), the United Nations Reliefs and Works Agency (UNRWA) delivered 500 parcels of humanitarian aid in the Syrian capital of Damascus. The aid was distributed in the Yarmouk district, in which a major Palestinian refugee camp is located and currently under siege.

A local activist in the Yarmouk district, Rami el-Sayed, said the UNRWA distributed the 500 parcels of humanitarian aid and a few tons of flour inside Yarmouk under the supervision of the organization's own executives for the first time. "Previously, the UNRWA and the Syrian Red Crescent would distribute the aid at the entrance of the Yarmouk district," he said. When that was the case, "Many people were unable to receive the aid due to fear of arrest."

The activist stressed that the assistance provided is far from sufficient to help the starving residents of Yarmouk. "People want the siege to be lifted rather than to receive aid alone," said the activist. "The infrastructure of the neighborhood is decrepit. We have been deprived of electricity for a year. Bakeries are closed due to lack of flour. Hospitals cannot provide service as no medical materials are available."

El-Sayed also noted that the regime does not allow medical materials and staple food to enter the camp by any way other than through relief organizations.

These conditions have led to widespread starvation and disease.