At least 11 killed, 24 wounded in attack on Pakistani court 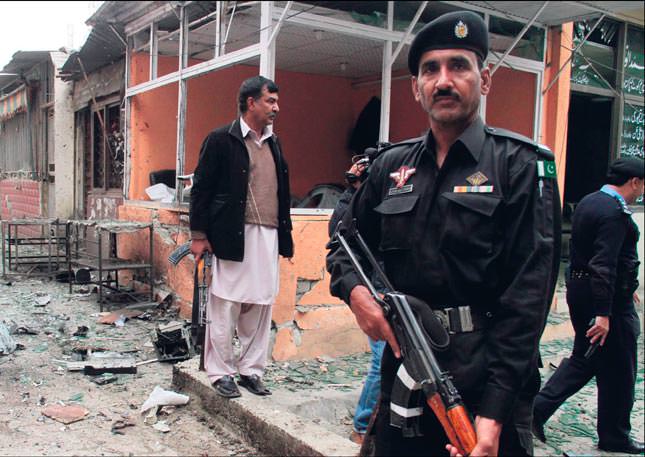 Gunmen burst into a court in a busy shopping area in the heart of Pakistan's capital, killing at least 11 people in a suicide-bomb and gun attack likely to shatter any prospect of meaningful peace talks with Taliban insurgents

Islamabad (Reuters) - At least 11 people, including a judge, were killed and 24 wounded in a bomb attack on a court in the center of the Pakistani capital of Islamabad yesterday.

The Pakistani Taliban, who have declared a month-long ceasefire to pursue peace talks with the government, immediately distanced themselves from the attack as well as a separate blast on the Afghan border which killed two soldiers.

An explosion reverberated in central Islamabad just after 9 a.m., followed by bursts of gunfire. Police said at least 30 were wounded. A judge was among those killed. "There was a blast, then there was a lot of gunfire. Gunmen were spraying bullets at everyone," said Faisal Ali, a businessman who witnessed the attack. Even as the Taliban declared willingness to talk peace, almost daily attacks have continued around Pakistan in past weeks, showing that the central Taliban leadership is not entirely in control of its operations.

"We have already declared a ceasefire for a month and we stand by our promise," a Taliban spokesman said. Bomb attacks are rare in Islamabad, the leafy and hilly seat of Pakistan's government. The judge, Rafaqat Awan, was killed on the spot. He had rejected a petition last year to file a murder case against former President Perzez Musharraf over his order to storm a hardline mosque in Islamabad in 2007.

During Monday's attack, two suicide bombers blew themselves up outside the courtroom where a hearing had just started, police said.
Two other attackers were killed in the ensuing gun fight with police. Police said gunmen fired at random targets in the area after the initial explosion. Shortly afterwards, police blocked entry and exit points to the area, a maze of narrow, dusty streets lined with one-room shops and offices.

Commandos in camouflage knocked on doors and secured street corners as they combed the area for more militants. Police secured the area an hour later and the market resumed normal operations. At the court, broken glass and charred human remains littered the site of the blast at the F8 market area as residents and police rushed around in bloodstained clothes.

The Taliban, a fragmented group consisting of dozens of smaller bands of militants, said at the weekend they would observe a one-month ceasefire to try to revive peace talks and called on all groups to observe it.

Talks broke down last month after a series of attacks and counter-attacks by the army and insurgents. Observers say striking a deal with the central leadership would not stop the violence because many fridge militant groups operate independently from the central Taliban command. The Pakistani Taliban, who are fighting to bring down the Pakistani state, are allied with, but separate from, the Afghan Taliban. The Afghan Taliban are fighting to expel foreign forces from Afghanistan and do not fight Pakistani security forces.