Death toll of women reaches over 12,000 in Syria 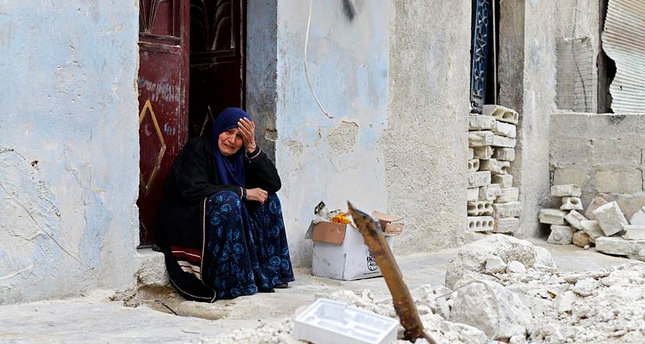 The Syrian regime has taken the lives of more than 12,000 women and more than 7,500 have been victimized by rape

At least 12,813 women were killed by attacks carried out by the Syrian regime during the civil war in Syria in the last three years, according to the Syrian Network for Human Rights (SNHR).
The organization issued a report, entitled "Syrian women, truth and pain" to commemorate International Women's Day.
The report claims that most of the women lost their lives through attacks carried out by the Syrian regime. 483 women were shot by snipers, 31 of them were killed by torture in the government's detention centers, the report said.
The report also reveals that approximately 87 percent of those killed by the Syrian regime were civilians, and 11 percent of these were women.
More than 7,500 women have been raped since the civil war started and 850 of these events occured in prisons controlled by the Syrian regime, SNHR stated.
The SNHR underlined that the Syrian regime is heavily violating human rights against women, and said that there are more than 4,000 women in Syrian prisons.
The Islamic State of Iraq and the Levant (ISIL) which carries out attacks on the opposition groups in Syria killed 33 women so far.
According to the SNHR, women in Syria are being used for bartering. "In order to rescue a person who has been kidnapped, women are being used as a bargaining tool," the report said.
The report declares that the Syrian regime's acts of violence against women are humanitarian crimes and calls on the United Nations Security Council to start an investigation.
Meanwhile, Syrian Local Coordination Committee (LCC) stated that Hezbollah militants in Syria, who were backed by regime forces, attacked the besieged village of Zara in Homs province on Saturday killing 20 people.

The Syrian Revolution General Commission (SRGC) confirmed the attack and said that the Assad forces have been blockading Zara village for a while. The committee and general commission described the incident as a 'massacre'.