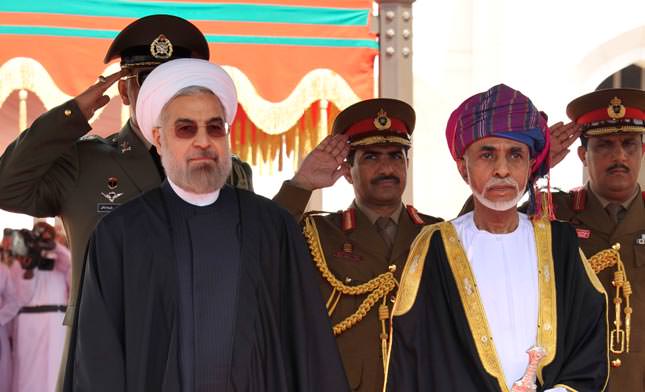 Iranian diplomats have shifted their focus to improving relations with Gulf states. Highlighting this shift in policy is Iranian President Hassan Rouhani's two-day trip to Oman, which began yesterday

Oman and Iran are expected to sign numerous cooperation agreements in the petroleum, natural gas, banking and cultural sectors. The trade volume between Iran and Oman is expected to reach approximately $1 billion as of this year and is expected to climb to $10 billion in the next year. This will be Rouhani's first visit to an Arab country in the Persian Gulf.

In August, bin Said traveled to Tehran, becoming the first foreign leader to visit the Iranian president since he took office. During that visit, bin Said said his country was prepared to develop trade routes through Iran between Oman and Central Asian countries such as Turkmenistan and Uzbekistan.

Gulf countries play an important role in Iranian foreign policy. For Tehran, relations with Saudi Arabia, which is the main political and ideological opponent of Iran in the Islamic world, are of the utmost importance.

In the period of former President Mahmoud Ahmadinejad, Iranian foreign relations were in dire straits.

The hardline policies of Ahmadinejad and his stubborn attitude in regards to the nuclear problem brought the country face to face with a political and ideological propaganda war against Western states and Gulf monarchies.

Turkish news station A Haber's correspondent in Iran, Mehmet Ali Akbulut commented on Rouhani's visit and said, "Oman, a member of Gulf Cooperation Council, never had a hostile attitude toward Iran. During the eight year-long war between Iran and Iraq, Oman neither took the side of Iraq nor Iran. Yet, it did not sever ties with Iran. Even when there were border disputes with Saudi Arabia and the United Arab Emirates, Oman kept up economic cooperation [with both countries] in many areas, primarily energy. What's more, it played a role in bypassing the embargo against Iran by purchasing Iranian gas and selling it to the world.

As there was no progress in efforts to transfer Iranian natural gas between India and Pakistan, Iran is searching for alternative ways to sell natural gas through an underwater pipeline to India across Oman. Oman conducted and still conducts bridging diplomacy between Iran and the West, especially the United States. Iran has outstanding issues with countries on the other side of the Persian Gulf, such as the dispute over the three islands with the UAE, with Bahrain over pressure on the country's Shia population, with Qatar about the actualization of Western policies, with Saudi Arabia about differences of opinion based on sects and history and with Kuwait about similar problems. On the other hand, Oman does not have any problems in these terms," said Akbulut. "Oman enjoys military, economic and strategic cooperation with Iran.

Rouhani is the second Iranian leader to visit Oman since the 1979 Islamic Revolution. His hardline predecessor Mahmoud Ahmadinejad visited the sultanate in 2007.