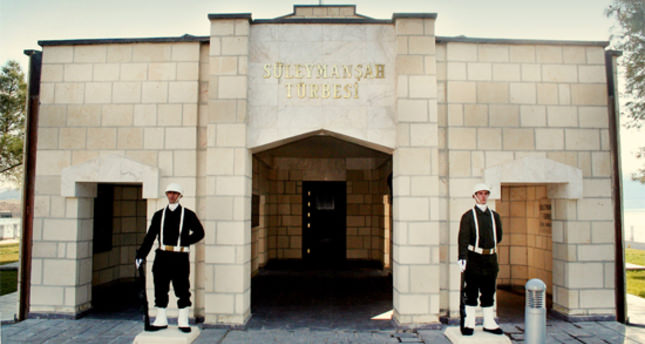 A tomb within Syria belonging to the grandfather of the founder of the Ottoman Empire, Süleyman Shah, will be protected no matter what, says Foreign Minister Davutoğlu. The tomb is protected by Turkish soldiers

ANKARA – Foreign Minister Ahmet Davutoğlu yesterday says if anyone attacks Süleyman Shah's Tomb in Syria - whether the regime or radical groups - Turkey will respond in the same manner. The tomb of Süleyman Shah, the only Turkish territory in Syria, is under threat from al-Qaeda. The Turkish government has been closely monitoring recent events and evaluating any possible attack by the Islamic State of Iraq and the Levant (ISIL), a branch of al-Qaeda, by urging military vigilance. In case of any attack towards the tomb of Süleyman Shah, Turkey will protect its territory via its air forces.

Since last month, there has been a violent conflict between ISIL and the Free Syrian Army (FSA) within the surrounding area of the tomb of Süleyman Shah, which is located near the city of Aleppo and under protection of Turkish armed forces.

Pointing out that pursuant to international law, the tomb of Süleyman Shah and the land surrounding it is Turkish territory and the country would take any necessary measures for territorial security, Foreign Minister Ahmet Davutoğlu said: "Currently, there is no infringement on our land and Turkish armed forces in Syria. In case of any possible threat, we are ready to take all necessary measures."

During the press conference after the third trilateral meeting of the ministers of foreign affairs of Turkey, Azerbaijan and Iran held in Van, Davutoğlu answered questions about the tomb of Süleyman Shah.

Davutoğlu indicated that they are concerned about current issues in Syria, adding that the Syrian regime has created a lack of power and authority, resulting in a great security crisis. There is also an increase in terrorist attacks by radical groups attempting to control the northern parts of Syria. "The interesting thing is the cooperation between the terrorist groups and the Syrian regime," Davutoğlu said. He further stated that these groups have put more pressure on people living in northern Syria without experiencing any struggle with the regime. It has been reported that radical groups are advancing towards the FSA.

Davutoğlu indicated that there is an ongoing fight in that region, adding that the FSA is not only fighting the Syrian regime, but also ISIL. He pointed out that ISIL has recently attempted to control the territory around the tomb of Süleyman Shah. Underlining that Turkey is closely monitoring developments, Davutoğlu continued: "In compliance with international law and the Treaty of Ankara (1921), the territory surrounding the tomb of Süleyman Shah belongs to Turkey and is our only trans-boundary land. Therefore, Turkey is entitled to take any measures concerning territorial security and sustainability. We will take the necessary actions if there is any attack by the Syrian regime, terrorist groups or any others. Turkey will take all measures to protect its homeland without any hesitation."

There have been negotiations between the Ministry of Foreign Affairs, the General Staff and the National Intelligence Service and all affiliated departments with respect to the recent political issues. Davutoğlu indicated that all information has been submitted to President Abdullah Gül and Prime Minister Recep Tayyip Erdoğan. "Currently, there is no infringement on our land and the Turkish armed forces in Syria. In case of any threat, we are ready to take all necessary measures. There is no need to hesitate on this issue. We hope that there won't be any infringement on our armed forces and territory. Otherwise, Turkey has already carried out all necessary preparation. All possibilities have been taken into consideration," he added.

The tomb has been under continuous protection since the beginning of the humanitarian crisis in Syria. The Turkish General Staff has put any possible attack on its agenda due to the increased tension between the two sides.

Under the protection of 28 Turkish soldiers, the tomb of Süleyman Shah is a mere 30 kilometers from the Turkish border. The authorities indicated that Turkish land and air forces have carried out a comprehensive evaluation, adding the Ministry of Foreign Affairs and the General Staff have taken all possibilities into consideration. In case of any attack by ISIL on the tomb, the attack will be considered a territorial infringement on Turkish land. The Turkish armed forces will directly respond to ISIL through an air attack.

The tomb of Süleyman Shah, the grandfather of Osman I, who was the founder of the Ottoman Empire, is located in the village of Karakozak within the borders of Aleppo.

In compliance with the Treaty of Ankara entered between France and Turkey, this territory belongs to Turkey. Therefore, Turkish soldiers keep watch to protect the tomb.