Thousands of Palestinians demonstrate in support of Abbas 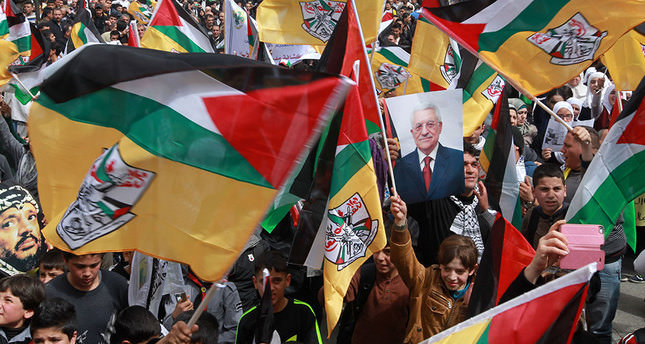 RAMALLAH – Thousands of Palestinians took to the streets of the West Bank yesterday in a show of support for Palestinian Authority (PA) President Mahmoud Abbas hours before the latter's scheduled meeting with U.S. President Barak Obama in Washington. Thousands gathered in Ramallah's central Manara Square to back the Palestinian leader and urge him not to concede what they say are inalienable Palestinian rights. The representatives of several Palestinian factions called on Abbas not to bow to U.S. and Israeli pressure to sign a peace deal with Israeli at the expense of longstanding Palestinian demands. "Palestinians poured onto the streets to deliver the message that the Palestinian street fully supports the president," Osama al-Qwasmi, spokesman for Abbas' Fatah movement, told Anadolu Agency. "Abbas is resisting enormous pressure to abandon [Palestinian] national principles," he said. "We're doing our duty to support our president in his quest to establish an independent [Palestinian] state with Al-Quds [occupied East Jerusalem] as its capital," al-Qwasmi added. At the rally, members of Fatah's youth movement burned posters of sacked Fatah leader Mohamed Dahlan - Abbas' political rival - and decried "offensive" remarks made by the latter against Abbas during a recent interview on Egyptian television. In Bethlehem, hundreds - including many government officials and students - marched from the presidential residence to the Church of the Nativity Square to show their support for the Palestinian president. Similar gatherings were seen in Jenin and Nablus. "We're here to say that not only the Fatah movement, but all Palestinians, supports Abbas," Deputy Governor of Jenin Abdullah Barakat, who took part in a pro- Abbas rally in his city, told Anadolu agency. "We're here to deliver a message to the president and the whole world that we stand in the same trench with Abbas," Barakat said. Fatah has called for massive pro-Abbas demonstrations in the West Bank to show support for the Palestinian leader during his planned Wednesday meeting with the U.S. president. According to press reports, Obama is expected to pressure Abbas to extend the deadline for ongoing Israel-Palestine negotiations and recognize Israel as a "Jewish state." Direct US-brokered peace talks between Israeli and Palestinian negotiators resumed in Washington last summer after a nearly three-year hiatus. During a visit to the region in January, Kerry proposed a "framework" for an eventual peace deal that would address so-called "final-status issues," including borders, security, Palestinian refugees and Al-Quds. Abbas, for his part, has repeatedly said the PA would not compromise on longstanding Palestinian principles - including Al-Quds, the right of refugees to return to historical Palestine, and the refusal to acknowledge Israel as a "Jewish" state - in its ongoing peace talks with Israel.