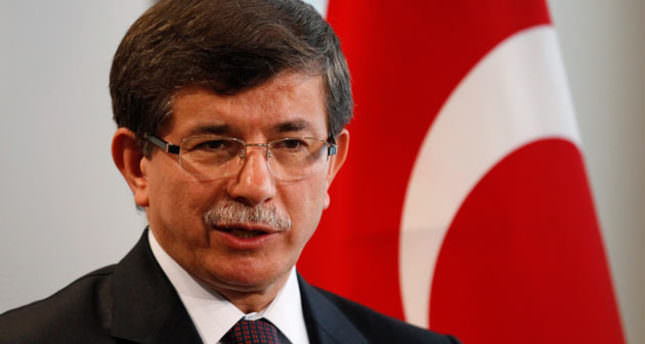 ANKARA – The international community has failed a big test in Syria, Turkish Foreign Minister Ahmet Davutoğlu said on Monday, as the country entered its fourth year of civil war. "If the Syrian crisis continues on this track, most probably it will be the darkest page in the history of the 21st century," Davutoğlu told the Anadolu Agency (AA), adding that Turkey had done what was needed. "The most painful fact is that there are more than 2.5 million Syrians in Turkey who do not have access to essential goods like bread and water," Davutoğlu said.

He thanked all the Turkish provinces involved in hosting the Syrian refugees. "We are hosting nearly 700,000 Syrian refugees," Davutoğlu noted, adding that "220,000 to 230,000 refugees are staying in camps."

More than 100,000 people have been killed since the conflict between opposition forces and the regime of Bashar Assad began in March 2011, according to the United Nations.

The Liwa al-Twahid group in the Syrian city of Aleppo has captured 34 Alawite soldiers in clashes with regime forces over the last three years.

The Liwa al-Twahid spokesman, Salih Anadani, told a correspondent for the Anadolu Agency in Aleppo that the group wanted to arrange a deal to exchange the soldiers they hold for women prisoners held by the regime.

Ali Hasan, one of the captured regime soldiers, said that Syrian soldiers had been fighting on the front lines, yet Iranian and Lebanese hostages had been freed before them in prisoner trades. "The priority for the hostage swap should be given to the soldiers who fought in Syria," Hasan said. "We are still captive here. The regime must act immediately for a hostage deal if they want to rescue us."

Mahmud Salim, who worked for the Political Security Directorate in Raqqa before he was captured, sent a message to his family saying he was alright and hoped to see them soon. "We fought the regime opponents for more than one year,"

Salim said. "Why the regime does not take care of us?"

Another captured soldier, Ala Suheyl Nakit, said he was badly injured in a clash with the rebel groups. "I recovered with the help of the opposition," he said.

Under a deal brokered by Turkey and Qatar, the Assad regime agreed to free 2,130 prisoners in exchange for 48 Iranians held by Syrian rebels.

The United Nations has said that 3.5 million people have been internally displaced since the conflict erupted since the conflict began three years ago, and 2.5 million have sought refuge in neighboring countries. The vast majority of those refugees have fled to Lebanon, Turkey, Jordan, Egypt and Iraq. In Lebanon, there are more than 960,000 refugees, Turkey has around 634,000, Iraq has 584,500, and Egypt has 300,000 refugees.