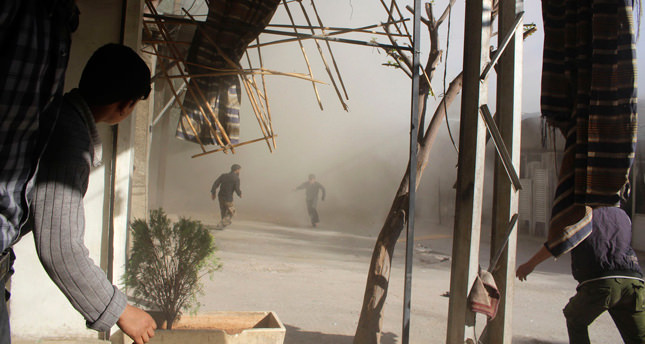 by reuters Mar 22, 2014 12:00 am
SYRIA — Fighters in Syria battled President Bashar al-Assad's forces for control of a border crossing with Turkey close to the Mediterranean on Saturday, part of an offensive aimed at opening up a oppostition link to the sea.

They said heavy clashes continued around Kasab crossing and a nearby village of the same name - both about 5 miles (8 km) from the coast - a day after opposition forces launched their assault.

Assad's regime have already lost control of most border - crossings with Turkey during the three year civil war but had held on to Kasab, gateway to the coastal province of Latakia which has remained an Assad stronghold.

In recent months, the president's regime have also made gains around the capital Damascus and the border region with Lebanon, seizing two opposition bases in the last week.

Syrian authorities accused Turkey of helping the fighters launch their attack on Kasab from Turkish territory, saying Ankara's army "provided cover for this terrorist attack" on the wooded and hilly border region.

Turkey and Gulf Arab states have backed the mainly Sunni Muslim against Assad, who is from the minority Alawite sect and is supported by Iran and Shi'ite fighters from Iraq and the Lebanese militia Hezbollah.

The attack on Kasab was carried out by fighters from the Nusra Front, al Qaeda's Syrian operation, and the Ahrar al-Sham brigade, part of the Front alliance.

The Front said its fighters repelled advances by the army and pro-Assad militia to retake the "liberated" crossing, posting a video of khaki-clad fighters wearing red armbands and firing at what it said were the government forces.

The Britain-based Syrian Observatory for Human Rights, which monitors the Syrian conflict, said the opposition forces had "in principle" taken control of the crossing itself, although fighting continued in the area and Assad's forces were still in control of Kasab village, barely a mile (two km) to the northwest.

More than 140,000 people have been killed in the conflict, while 2.5 million refugees have fled to neighboring countries and millions more need humanitarian aid.

With the erosion of state power, Syria has also become increasingly fragmented, with the Assad holding the centre of the country, opposition forces controlling much of the north and east. That prospect has alarmed many of Syria's neighbors.

"All the scenarios of partition in Syria will have disastrous results for Syria and the region," Jordan's King Abdullah told Al-Hayat newspaper in an interview published on Saturday.

"This will unleash endless waves of violence, hate and extremism which threaten to deepen civil war and sectarian fighting," the monarch said, warning it would spread across borders and threaten regional stability.

The turmoil in Syria has already spilled over into neighboring Lebanon, where car bombs have struck Beirut and other cities. Eleven people were killed on Friday in the northern city of Tripoli.

On Saturday, Syrian state media said an army unit east of Damascus had ambushed a group of Nusra Front fighters who had infiltrated from Jordan. Syrian television showed the bodies of around a dozen men lying on the ground, some with weapons.