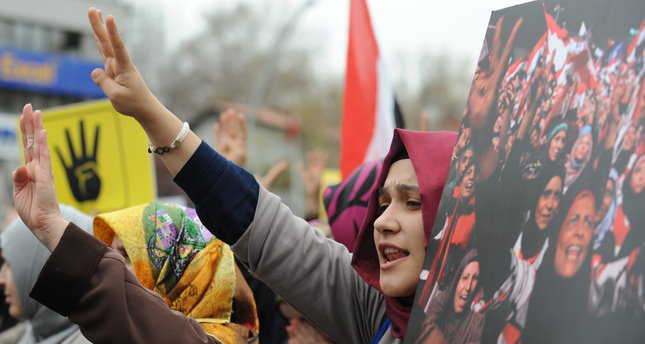 People took to the streets in Turkey on Friday to protest Egypt’s death penalty sentence of 529 supporters of the Muslim Brotherhood. The crowds called on the international community to stand against the coup regime

Gat hering at the courtyard of the Kocatepe Mosque, demonstrators unfurled a banner reading, "Death penalty by the coup regime of murderers is invalid." They then proceeded to march to the Egyptian embassy amid slogans in support of "resistance" by Muslim Brotherhood and condemning the coup leader Abdel Fattah el-Sisi.

Speaking on behalf of protesters, Mehtap Toruntay from Mazlumder condemned the coup in Egypt. "The coup is part of a project to weaken, criminalize and defame organized Islamic movements in the Muslim world to pave the way for puppet governments. Thus, the blow dealt to Jamaat-e-Islami in Bangladesh by imposing death sentence for its leaders and the ban on Muslim Brotherhood, a long-standing political movement in the Muslim world is one and the same. Toruntay said the international community including European Union, the United States and top Muslim body Organization of Islamic Cooperation were "accomplice" in the killing of Muslim Brotherhood supporters in Egypt. On death sentences, she said, "This ruling does not conform with any legal norms and is politically motivated. It is illegitimate under universal legal norms and if Egypt carries out executions, it will be a disgrace for Egypt's history."

A criminal court in the Egyptian province of Minya yesterday sentenced 529 supporters of ousted President Mohamed Morsi to death and cleared 16 others on charges of inciting violence and attacking police. The verdict was sent to the grand mufti, Egypt's highest religious authority, for approval. The trial involved more than 1,200 supporters of ousted President Mohamed Morsi and Muslim Brotherhood members who faced a range of charges, stemming from violent riots last August against the coup regime.

The court's ruling was condemned by the Turkish government. Prime Minister Recep Tayyip Erdoğan has criticized European Union for remaining silent on the mass death sentence. Foreign Minister Ahmet Davutoğlu said, "This decision shows the antidemocratic and illegal approaches of the current Egyptian military regime following the coup." Davutoğlu stated that Turkey would always side with the Egyptian people and underlined that death sentences showed the Egyptian regime was "far away from democracy."

The United Nations Office of the High Commissioner for Human Rights said it was "deeply alarmed" by the ruling. The United Nations called Egypt to reconsider the ruling and called the death penalty an unacceptable violation of international human rights.