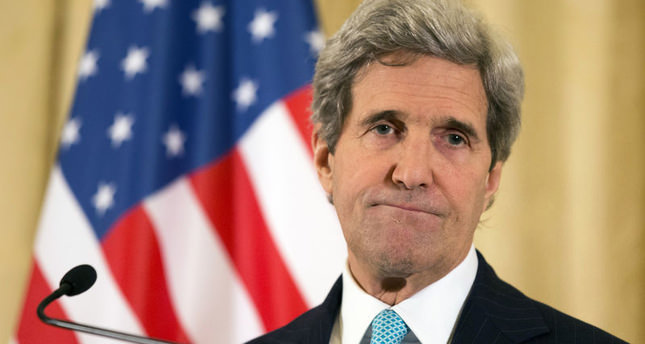 by Apr 01, 2014 12:00 am
JERUSALEM — US Secretary of State John Kerry on Tuesday held a second round of talks with Israeli Prime Minister Benjamin Netanyahu as he seeks to push forward faltering peace efforts.

The breakfast meeting came after Kerry made a surprise trip to Israel to keep the talks on track amid a bitter tussle over the expected release of Palestinian prisoners.

Talks with Palestinian leader Mahmud Abbas were cancelled Monday when a meeting with Netanyahu dragged on too late. Kerry met instead with the chief Palestinian negotiator Saeb Erakat.

Sources close to the talks have revealed that the US is discussing the release of US-born Israeli spy Jonathan Pollard as a way to unblock the talks impasse.

Pollard was arrested in Washington in 1985 and condemned to life imprisonment for spying on the United States on behalf of Israel. One proposal could see Pollard freed before the week-long Jewish holiday of Passover, which begins in mid-April.

In exchange, Israel would release the final batch of prisoners as well as another group of detainees, and the sides would agree to extend the talks.

State Department spokeswoman Jen Psaki however refused to be drawn saying: "Jonathan Pollard was convicted of espionage and is serving his sentence. I do not have any update for you on his status."

The Palestinians on Monday gave Kerry a 24-hour deadline to come up with a solution to the row over the release of the Palestinian prisoners, or threatened to go to UN bodies to press their claims for statehood.

But US officials insist things are moving, saying only that there are a lot of complex pieces to put in place.

It appears that Kerry is shifting his focus away from reaching a framework, towards simply keeping the two sides talking after an April 29 deadline expires.

More meetings with Israeli officials were planned Tuesday, before Kerry was due to fly to Brussels to take part in NATO talks set to be dominated by Ukraine.