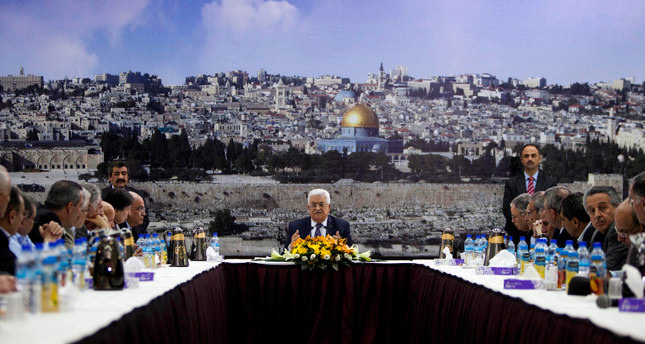 by Apr 02, 2014 12:00 am
RAMALLAH — A surprise decision by the Palestinian leadership to sign more than a dozen international conventions giving it greater leverage against Israel left the United States struggling to put peace talks back on track.

U.S. Secretary of State John Kerry canceled a visit to the de facto Palestinian capital, Ramallah, planned for Wednesday after President Mahmoud Abbas made the announcement on Tuesday in a meeting of senior officials of the Palestine Liberation Organization (PLO).

"My team is on the ground meeting with the parties even tonight. We urge both sides to show restraint while we work with them," Kerry told reporters in Brussels, where he was attending a ministerial meeting of NATO. He noted that Abbas said in his statements that he would be in touch with the Americans Tuesday evening.

"The important thing is to keep the process moving and find a way to see whether the parties are prepared to move forward. In the end this is up to the parties," he added.

The U.S.-backed talks, which are nearing their scheduled end after starting in July, veered toward crisis on Saturday when Israel did not follow through on the promised release of a group of over two dozen long-serving Palestinian prisoners.

Israel said it wanted a pledge from the Palestinian leadership that the talks, which have not made any obvious progress, would be extended before the detainees were freed.

The Palestinians balked and said Israel's reneging on the release freed them from a commitment they had made to the Americans last year not to confront Israel at the United Nations and other international bodies.

The agreements signed on Tuesday, officials said, included the Geneva Conventions - the key text of international law on the conduct of war and occupation.

Palestinians hope it will give them a stronger basis to appeal to the International Criminal Court and eventually lodge formal complaints against Israel for its continued occupation of lands seized in the 1967 war.

Describing the move as a response to Israel's own violation of pledges it made to carry on the talks, Palestinian officials held out hope that it would not scupper the process entirely.

"I don't see that the Palestinians had anything else to do. What are they expected to do? They waited one day, two days, and there was no sign (of a prisoner release)," top negotiator Mohammed Shtayyeh told Reuters.

"Going to some U.N. agencies does not mean it is stopping the process, but we need a serious partner ... for us it's a matter of dignity, Palestinian dignity," he added.