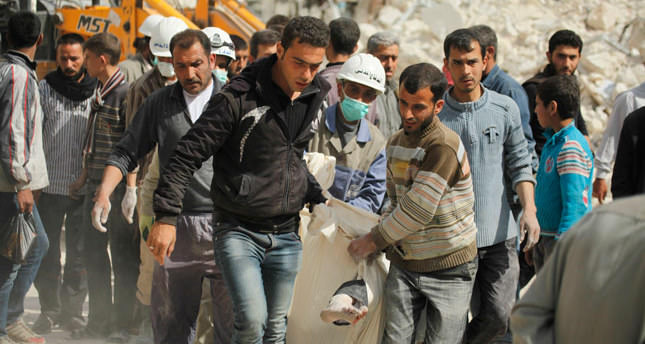 by Apr 07, 2014 12:00 am
GENEVA — The United Nations has been forced to cut the size of food parcels for those left hungry by Syria's civil war by a fifth because of a shortage of funds from donors, a senior official said on Monday.

As the humanitarian crisis within Syria intensifies, its neighbors are also groaning under the strain of an exodus of refugees that now totals around 3 million, U.N. High Commissioner for Refugees Antonio Guterres said.

"We know that this tragedy, together with the tragedy of the people displaced inside the country, 6.5 million, now shows that almost half of the Syrian population is displaced."

Donor countries pledged $2.3 billion for aid agencies helping Syria at a conference in Kuwait in January, but only $1.1 billion has been received so far, including $250 million handed over by Kuwait on Monday, U.N. officials said.

The delay meant that the standard family food basket for five people, which includes rice, bulgur wheat, pasta, pulses, vegetable oil, sugar, salt, and wheat flour, had to be cut by 20 percent in March to allow more people to be fed, WFP said.

Guterres's office needs more than $1.6 billion to fund fully its operations this year in response to the crisis, but has received only 22 percent to date, a UNHCR statement said.

Some 2.6 million Syrian refugees have registered in neighboring countries, while hundreds of thousands more have crossed borders but not requested international assistance.

Guterres pointed to the huge burden this was imposing on Syria's neighbours. In Lebanon, the more than a million registered refugees are equal to almost a quarter of the resident population.

At least one Syrian refugee was killed in Jordan's sprawling Zaatari camp when hundreds of refugees clashed with security forces, residents said on Saturday.

"And so it is very easy to trigger tension, and it is very important to do everything we can to better support both the refugee community and the host communities that generously are receiving them."