UN called on to investigate poisonous gas in Syria 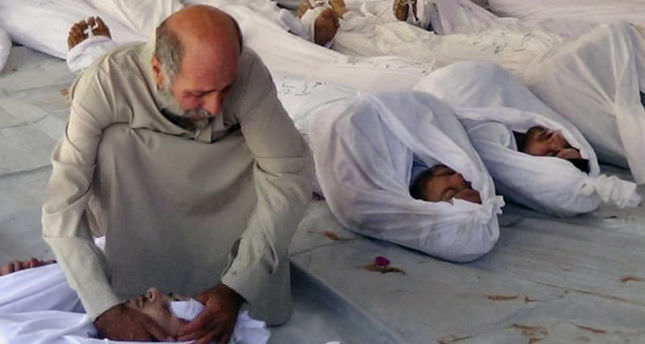 by AA
Apr 13, 2014 12:00 am
DAMASCUS — The Syrian National Coalition for Opposition and Revolutionary Forces has called on the UN to initiate an urgent investigation into the usage of poisonous gas by Bashar al Assad's regime forces to kill civilians.


The Syrian Revolution General Council said Saturday that ten people have been killed in Aleppo after an attack by regime forces using "barrel" and "vacuum" bombs.
Meanwhile, the Local Coordination Committee of Syria said that regime forces attacked the suburbs of Damascus and the district of Kafr Zeita in Hama with poisonous gas on Friday.
The silence of the international community in the face of Syrian massacres gives the "green light" to the Assad regime, the coalition said.
The Assad's regime is accused of continuing to use chemical weapons after agreeing in September 2013 to destroy them.

More than 100,000 people have been killed and over 6.5 million displaced during the ongoing conflict between Assad's regime and opposition forces.
Last Update: Apr 13, 2014 12:48 pm