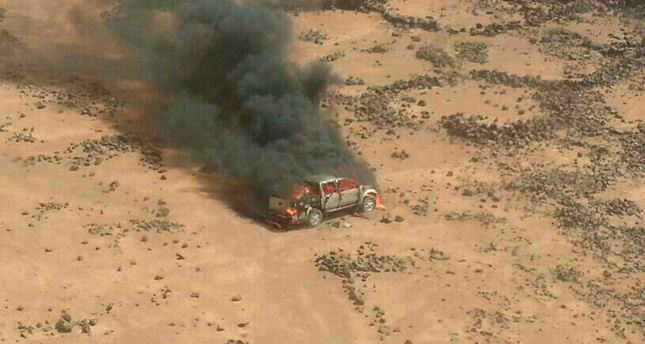 by French Press Agency - AFP
Apr 16, 2014 12:00 am
AMMAN, Jordan — Jordanian air force fighter jets destroyed a number of combat vehicles Wednesday as they tried to enter the kingdom from war-hit Syria by crossing the border, the army said.

"Royal air force jets fighters today at 10:30 am (0730 GMT) destroyed a number of vehicles that attempted to cross into Jordan from Syria," the Jordanian army said in a statement.

"The camouflaged vehicles tried to enter from an area with rugged terrain.

"The fighter jets fired warning shots, but they were ignored, promoting them to destroy the vehicles. The army will not tolerate such actions," said the statement.

A military official told AFP that "they were three-wheeled vehicles which tried to enter the kingdom" near Ruwaished in northern Jordan.
Jordan's border guards in recent weeks clashed with and arrested several people as they attempted to cross into the kingdom from Syria, where a devastating conflict has been raging for more than three years.

The government in Damascus has regularly accused Jordan of assisting rebels fighting its forces.

But Amman denies this, saying it has tightened control of the border and jailed dozens convicted of trying to cross the frontier illegally.
The kingdom, home to more than 500,000 Syrian refugees, says arms smuggling across the border with Syria has risen by 300 percent in the past year.