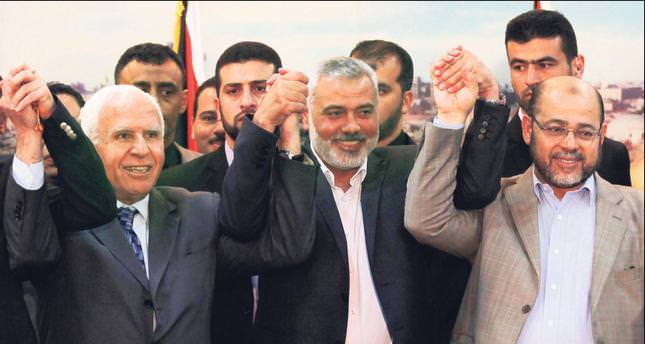 A reconciliation deal between Hamas, which Israel brands as a terrorist organization, and Fatah that governs the Palestinian Authority, infuriated Israel. In response, Israel suspended peace talks with the Palestinians

Israel's Foreign Minister Avigdor Lieberman on Thursday said, "A peace deal with the Palestinians is impossible after rival Palestinian factions Hamas and Fatah agreed to form a unity government."

He added that, Israel should resist pressure to resume talks with Abbas.

The announcement of the reconciliation agreement comes at the same time as floundering U.S.-brokered peace talks between Israel and the Palestinian Authority, led by Abbas of the West Bank-based Fatah party, are set to end on April 29. Israel also cancelled a scheduled negotiating session over the Palestinian deal.

Turkey's Foreign Ministry welcomed the announcement and the decision to hold elections.The ministry released a written statement that read, "We hope that the consensus will pave the way for the foundation of a government that embraces all Palestinians through the elections planned for the end of the year and a comprehensive, just peace in the area. We believe that the alliance between Palestinians is necessary for a sustainable and applicable peace in the region."

The statement said Turkey will provide support to the Palestinian people for the establishment of a free, independent and sovereign Palestinian state which can peacefully and safely be established in the region.

Turkey's Deputy Prime Minister Emrullah İşler also commented on the day's developments, saying the groundbreaking agreement between Palestine's rival movements will contribute to Middle East peace. "This agreement will lead to a strengthening of the communication and dialogue between the two sides. I hope it will be long-term."

Mashaal called Erdogan and informed him about the deal with Fatah, according to the Turkish Prime Ministry.

Erdogan reportedly told Mashaal that Turkey gives a great importance to the compromise among Palestinian groups and the national unity of Palestinians.

China's foreign ministry also welcomed a unity pact agreed between Fatah and Hamas.China "believes this will be conducive to Palestinian unity, and fundamentally conducive to the establishment of an independent Palestinian state and peaceful coexistance between Israel and Palestine", foreign ministry spokesman Qin Gang told a daily news briefing.
"This reconciliation should have happened earlier. For sure it will lead to positive results for Palestinians, but also for the entire region. Divisions within Palestine were a serious obstacle to peace," he said.

Head of the Palestinian Solidarity Organization (FİDDER) Hasan Bereketli said, "This is a decision welcomed with enthusiasm by the Palestinians and it would be a great deed if the agreement is signed. I hope everything [will work out]. Hamas stepped back as the people were in dire straits and lacked endurance.Thanks to this alliance, maybe the blockade on Palestine will be broken and the people will have affluence and a sustainable peace."

The head of the Turkey-based aid organization Cansuyu Assistance Organization for Foreign Affairs Şerafettin Mollaoğlu remarked, "Fatah and Hamas came together one year ago in order to establish peace but it was cancelled due to Israeli pressure. Both sides seem content with the agreement for now. However, I do not think the agreement will persist. Israel is not content with this reconciliation. As is known, Israel is at odds with Hamas, thus it may make a secret agreement with Fatah. That is why I think the peace will not be a permanent one."

Mustafa Sıtkı Bilgin, a Middle East expert, said, "The integration decision by Hamas and Fatah is important for the general Palestinian cause. These are the two most important groups within the Palestine Liberation Organization which represent the whole Palestinian people.But this decision has not been made easily and has a long-term growth course. An important point is that this decision was made only after the failure of the peace talks between Fatah and Israel. Israel has engaged in negotiations with Mahmud Abbas since July 2013 but [it has borne no fruit]. This is because Israel has tried to impose its objectives by ignoring basic Palestinian demands. Israel has not kept its promise to return to the borders in Jerusalem as they existed before 1967 Arab-Israeli War. Israel has also continued to build new houses in the occupied Palestinian territories.

"Now it seems that President Mahmud Abbas came to realize that the Palestinian objectives could only be realized if the Palestinians made a strong representation toward Israel and the Western powers through unity among themselves. This important decision was made toward this end. But this will not be an easy process and it will take some time. Looking back to Israel's history and politics, only one thing could move this state into an action: a strong and unified representation since the main pillars of Israel's policy have always been based on power and force. That is why if this decision is to be realized, it would eventually contribute to the possible future peace talks between Israel and Palestine."

According to the agreement, presidential and parliamentary elections should be held at least six months after the unity government's formation.

Stationed primarily in Gaza, Hamas came to power on January 25, 2006 after beating Fatah in national elections. The government was short lived due to Israeli pressure and a violent conflict between Fatah and Hamas which saw Hamas gain effective control over the Gaza Strip and Fatah over the West Bank.