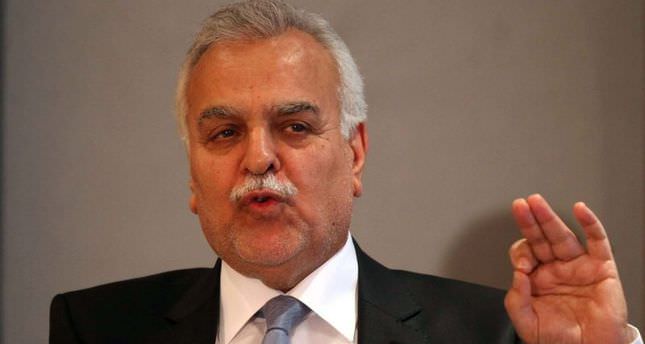 ISTANBUL — Iraq has been experiencing a new political atmosphere with the upcoming general elections planned to be held on April 30, 2014. The intense atmosphere indicates that even the most optimistic of predictions regarding the results yield no hope. Under the American led occupation and policies of successive governments, Iraq has witnessed huge devastations in infrastructure and socio- economics. Most importantly, the people of Iraq lost their faith in both democracy and politics. Tariq al-Hashimi, the man who was elected by the people as former vice president and now cannot even enter his own country, is the embodiment of the Iraqi people's disbelief in democracy.

Al-Hashimi, who has been sentenced to death in his country, based on allegations that he was directly involved in killing a female lawyer and a general in the Iraqi army, spoke to Daily Sabah about upcoming general elections and Iraq's future.

Can you evaluate the political atmosphere in Iraq before and after the invasion by the U.S.?

The political atmosphere in Iraq post U.S. invasion is an unbelievable mess with a sectarian authoritarian regime that is controlled and manipulated from Tehran. The political process is fragile and security is the worst in the history of Iraq. Prior to 2003, the standard of living was not satisfactory, democracy was lacking, but we at least had stability and safety; we were enjoying sovereignty.

Today millions of Sunnis are targeted by virtue of just being that, Sunni.

Do you believe that the upcoming elections will reflect the will of all Iraqis?

The major demand of the Iraqi people and the key issue is simply change. The upcoming election, however, is insufficient to fulfill this mission. Nori al-Maliki's endeavor to consolidate absolute power is the major threat. In order to achieve this and win the elections, al-Maliki is expected to manipulate the elections through fraud and cheating.

Taking this into consideration, even if proven to be conducted as per international standards, there is no guarantee that the winning party is going to form the government - I am specifically referring to the 2010 elections. Generally speaking and taking into account the complexity and range of challenges we are faced with, I am not optimistic about the upcoming elections. What we need more right now is for the election to first stop the ongoing deterioration and to recourse the political process and put it back to on its democratic track.

Do you think the Maliki government will ever bring democracy, peace, and prosperity to Iraq? Why, why not?

There is no hope whatsoever for Maliki's government to ever bring any democracy, peace, stability, or prosperity to Iraq...no one will benefit under the Maliki reign - not the Shiites, not the Sunnis, not the Kurds nor the minorities. Prosperity will be limited to the hundreds of Daawa officials that are raping Iraq of its wealth and laundering the fruits of corruption in Beirut, Dubai and Amman, but God willing, their day will come.

There are tribes in Iraq fighting against Maliki forces. Do you think that they will able to change Maliki's mindset toward his people?

The fighting tribes of Iraq are forced to carry weapons to defend themselves from the aggression of al-Maliki's army and the terrorist sectarian militias that he supports.

What we have in Anbar and Diyala, the Salahudeen suburb of Baghdad, Kirkuk, Mosul... is an armed revolution heading for political, social, security, economic ....agenda for reform.

Therefore the revolution in question is becoming the real glimmer of hope for change in Iraq rather than the elections.

Political solution does not seem visible anytime soon in Iraq. How do you evaluate your position in this atmosphere?

I am actively monitoring the developments in Iraq in addition to following the events on the ground hour by hour. I advise the honorable Iraqis from all sects as how to oppose this authoritarian and sectarian regime that is controlled from the outside. I am sure that my case will be finalized legally the day the change takes place, but until then, the fate, the destiny of my country has priority over any personal issues.

Do you think Turkey is applying reasonable policies with respect to the Iraq issue? Whilst Turkey strengthens cooperation with the Kurdish government how does this affect the Sunnis?

Turkey's foreign policy regarding Iraq has always been a wise one. Turkey keeps equal distance with all sects and minorities. The Turkish relationship with the Kurdish people has improved drastically over the past two years and this is something that Iraq's Sunnis encourage.

We hope Turkey will do its utmost to work with the United Nations to help save Iraq from this catastrophic downslide due to Maliki's authoritarian rule and Iran's evil meddling in Iraq.

Numerous commentators, journalists and experts think that Iraq has gradually been dragged into a sectarian war.
Do you agree with those views?

No I don't think so. Iraq will never slide into a full sectarian war simply because Iraqi tribes, families, societies are all mixed. The current fighting is manipulated by Nori al-Maliki who absolutely failed as prime minister.

He is trying to mislead the Shiite into believing that he is a victim of the Sunnis and that therefore he should be supported for the third time around. The conflict is not between the Shiite and the Sunni, but rather between the Sunni and the Shiite elite - the puppets of Tehran. The campaign against the Sunnis started taking shape after the withdrawal of the U.S. forces in December 2011 and Maliki's campaign against me was the first salvo fired in this regard. We all have common ground - we have shunned Iranian meddling, sectarianism, corruption...and we are all working towards a better future for Iraq. In today's Iraq this makes you a prime target.
RELATED TOPICS