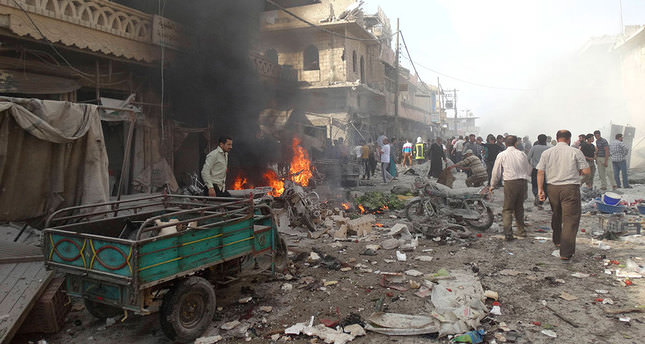 by AA
Apr 27, 2014 12:00 am
ALEPPO, Syria — Syrian regime killed 66 people including women and children in offensives on several cities across the country on Saturday, activists said.

Assad forces killed 30 people in Aleppo, 13 Idlib and Damascus each, 4 in Hama, 3 in Daraa, 2 in Homs and one in Latakia, according to the London-based Syrian Network for Human Rights, which tracks civilian and dissident casualties.

The Syrian army killed a number of opposition fighters in operations in Homs, Daraa and Qamishli, the agency said.

Syria has been gripped by almost constant fighting since President Bashar al-Assad's regime responded to anti-government protests in March 2011 with a violent crackdown, sparking a conflict which has spiraled into a civil war that has claimed more than 100,000 lives so far.