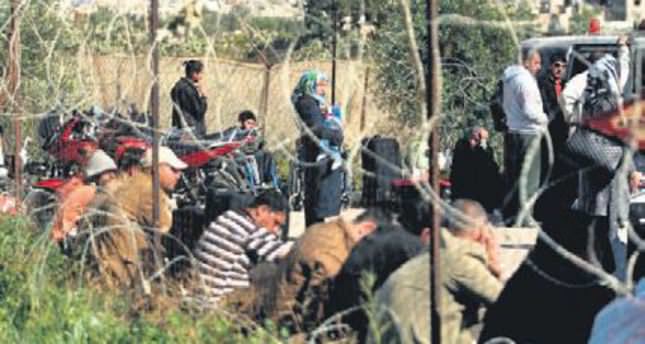 by AA Apr 28, 2014 12:00 am
GAZA — Israel yesterday reopened the Karam Abu Salem commercial crossing with the southern Gaza Strip following a 10-day closure, a Palestinian border official has said. "Israeli authorities reopened the Karam Abu Salem crossing on Sunday morning, allowing in shipments of goods and food aid that had been denied entry into the enclave for the past 10 days," Raed Fatouh, head of a Gaza Economy Ministry committee tasked with coordinating traffic through the crossing, told Anadolu Agency.

Around 400 trucks carrying commercial and industrial goods as well as amounts of diesel needed to operate the enclave's power plant are expected to be allowed into the strip on Sunday, he said. Israel partially reopened the commercial crossing with the southern Gaza Strip over the past two days amid ongoing closure of cargo terminals with the Palestinian enclave for the Jewish Passover holidays.
Karam Abu Salem's prolonged closure over the past days has led to a fuel crisis inside the blockaded strip. With Egypt maintaining its ongoing closure of the Rafah border crossing, Karam Abu Salem remains the hapless Palestinian enclave's only functioning commercial crossing.

Home to roughly 1.8 million people, the Gaza Strip has six border crossings with Israel and one with Egypt. Since the Palestinian resistance faction Hamas seized control of the strip in 2007, Israel has closed four of its Gaza crossings, leaving only the Karam Abu Salem and Erez crossings open to limited traffic.