Bashar Assad to run for a third term 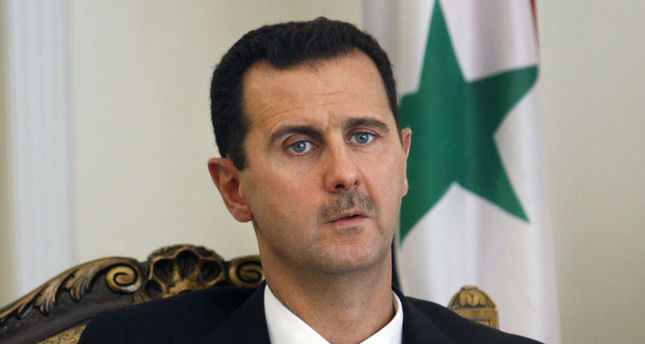 by Anadolu Agency Apr 29, 2014 12:00 am
Syria's embattled President Bashar Assad announced yesterday he will run for a third term in June's third presidential elections, officials said.Parliament speaker Mohammad Jihad al-Laham said during a televised meeting that the Assembly received Assad's presidential candidacy, Syrian news agency SANA reported. Six other contenders are in the race, but they are mostly expected to give the election a veneer of legitimacy, analysts say. Following the announcement, the state-run TV also ran a brief biography of Assad, quoting him as asking Syrians not to resort to celebratory gunfire and telling them that "we are now in the atmosphere of (democratic) elections in Syria for the first time in its contemporary history." It was unclear if that was meant as acknowledgement that previous elections were not democratic."But a call to elections or the vote, if and when it's held won't be enough to heal Syria's bitter war, now in its fourth year, said activists. The conflict, which has killed over 150,000 people and displaced more than one-third of the population, began as largely peaceful demonstrations against Assad's rule in March 2011. But it quickly turned into an armed uprising and a civil war. "If he (Assad) had announced this at the beginning of the revolution, it would have saved all that blood that was shed," said activist who uses the name Abu Akram al-Shami, speaking over Skype from Damascus. Al-Shami said he and other activists would ignore the election, adding that their war now wasn't just against Assad but for his entire government to fall. "It's about the whole regime. Even if, let's say, he (Assad) left office, as things now stand his regime would continue," al-Shami said. Syria has announced to hold presidential elections on June 3 while fresh investigations about the use of chemical weapons are under way. The U.S. has called the election a parody of democracy.