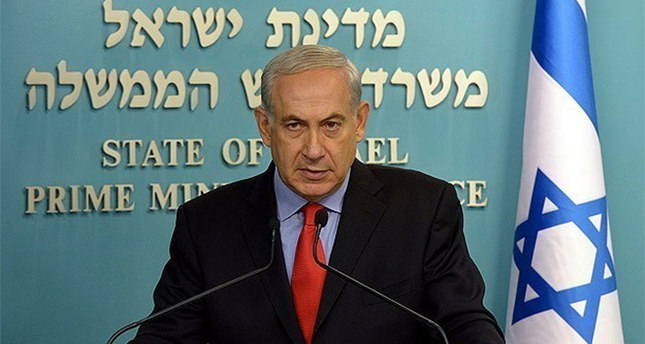 by AA Apr 29, 2014 12:00 am
JERUSALEM — The Israeli government has begun implementing economic sanctions it had imposed on the Palestinian Authority after applying for several U.N. conventions, according to Israeli Yediot Ahronot news website.

The move to go ahead with the penalties came on the same day originally set by the U.S. mediators as a deadline for peace talks between the Israelis and the Palestinians.

The talks hit a new snag in March after Israel refused to release 26 Palestinian prisoners despite earlier pledges to do so.

Peace talks between Israeli and Palestinian negotiators had resumed in Washington last July after a nearly three-year hiatus.

Israeli Prime Minister Benjamin Netanyahu suspended the talks after the Fatah movement of Abbas signed a reconciliation deal with rival Hamas last week, saying the Palestinian leader must choose between reconciliation with Hamas and peace with Israel.

Israel also announced a series of punitive measures against the Palestinians over the Hamas reconciliation deal.

It announced on Sunday freezing Palestinian construction projects in Area C which makes up nearly 60 percent of the occupied West Bank and is under full Israeli control.

Israel has also decided to increase deductions from tax funds it collects on behalf of the Palestinian Authority.

Israel collects tax revenue for the Palestinian Authority worth roughly $144 million a month, as agreed in the 1993 Oslo Accords.

According to a senior Palestinian source, Israel regularly deducts roughly $28 million from the revenues to cover past debts by the Palestinians to Israel Electric Corporation, which supplies the West Bank and Gaza Strip with electricity, and other services.

However, the source said, Israel has now fixed deduction at $38 million, a move that is expected to make problems for the cash-strapped PA.