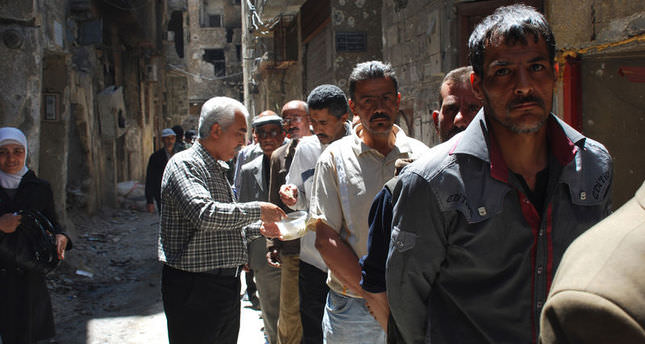 by AA
Apr 29, 2014 12:00 am
GENEVA — Syria will not give permission for humanitarian aid convoy to cross the Turkish border into northern Syria despite a letter from lawyers published in the Guardian newspaper on Tuesday asking for the international organization to deliver aid with or without the Syrian government's consent, UN said on Tuesday.

UN Coordinator of Humanitarian Affairs public information officer Jens Laerke said in a press conference at the UN headquarters in Geneva that to reach all people in need, the UN Security Council resolution as of February, says that all parties should allow humanitarian access even to cross borders, and adding that the UN recalled Syrian authorities for permission few weeks ago for a UN cross border convoy from Turkey into northern Syria.
"As of now, we did not get any response. The main problem is the consent of the (Syrian) authorities. They are not giving us permission to do so," Laerke said.
On March, UN had lastly sent 78 convoys across Turkey's borders to northern Syria carrying food, blankets, mattresses, family and hygiene kits, medicine and medical supplies.
"Turkish border is the best and fastest way to reach people in need into Northern Syria," Laerke added.
On February, Laerke also warned that the Syrian regime had not granted aid convoy's permission to cross the Turkish border into northern Syria.
"We cannot cross the border without an agreement," he said. "But, it would be very helpful and a lot easier for us to deliver aid into Syria if we could cross from Turkey."
According to the UN, there are more than nine million Syrian people in need of humanitarian aid, of whom 3.5 million are in the hard-to-reach areas.
Last Update: Apr 29, 2014 8:34 pm