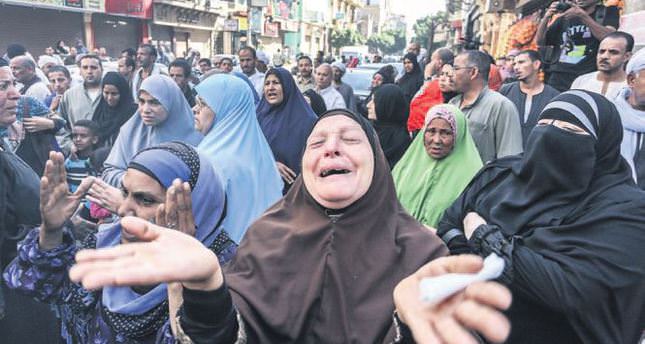 An Egyptian court issued a verdict which finalizes the death sentence for 37 people. Turkish top officials said they are concerned as the decision violates international standards of human rights

ISTANBUL — An Egyptian court on Monday referred 683 supporters of former Egyptian President Mohammed Morsi and top Muslim Brotherhood leader Mohamed Badie to the country's chief Islamic authority, the grand mufti, after all were sentenced to death. Earlier in March the same court referred 529 people to the Mufti to issue a legal opinion on their death sentences. The defendants in both cases are accused of lynching policemen in Matay, a town in Minya province, southern Egypt on Aug. 14. After the court received the mufti's opinion concerning the earlier cases, only 37 people were sentenced to death but 492 other defendants were hit with life terms on the same charges on Monday.

Morsi was toppled by the military on July 3, 2013 and thousands died in clashes that followed. In total, of 1,212 people are facing charges over the Minya uprisings. According to the Egyptian law, a judge who intends to sentence people to death must first refer the case to the mufti for consultations. After he receives the mufti's opinion, which is not legally binding, the judge issues a verdict.

Four-hundred-ninety-two of the March case defendants were sentenced for life. They also have to pay the sum of 20,000 Egyptian pounds (TL 5,963) in fines," Khaled El-komi, the coordinator of Matay case defense authority, told Daily Sabah.

"Only those who were present from the 529 defendants have the right to contest the verdict," he added.

Both Minya cases played out quite similarly.Verdicts were reached after just two court sessions in which defense lawyers said there was no time to assess thousands of pages of testimony and court documents.Also many of the defendants said they were not present during the attacks and not even supporters of the Muslim Brotherhood. In some cases, they say they were not in the province itself.

The Turkish Deputy Prime Minister Bülent Arınç called the decision shameful not only for the Egyptian government but also world powers who have remained silent on the decision. Arınç said he hopes the court will rescind death penalty decisions and he urged the U.S. and EU to stand against the sentences.

Prosecutors say the defendants in both cases are brotherhood members who killed two police officers during nationwide violence last August. The Muslim Brotherhood of Mohammed Morsi, the former elected Egyptian president, denied the allegations and stated that not all the defendants belong to the brotherhood and that the incident in question occurred during a peaceful protest against the "coup."

"It is like a movie. I have no comment.Let's leave the comment to the audience,"El-komi said when he was asked to comment on the verdicts.
The authorities have launched an allout crackdown on Morsi's supporters and the members of the Muslim Brotherhood since his ouster last July. In the eight months, thousands of the groups' members and sympathizers have been arrested.

The government had defended the court's handling of the first mass case, insisting that the sentences were passed only "after careful study" and were subject to appeal. Authorities have also designated the Muslim Brotherhood a terrorist group, blaming it for a series of bombings and attacks.The group has strongly denied the accusations.

The new court decision that referred 683 new defendants to the mufti for consultations, with the intention of sentencing them all to death, is scheduled to be issued on June 21.

Speaking on a program aired on Turkish TV channel a Haber, Deputy Prime Minister Bülent Arınç on Monday harshly criticized an Egyptian court's ruling for the death penalty for 683 people. Urging the U.S. and EU to stand against the decisions, Arınç defined the decision as shameful not only on the Egyptian government but also the world powers that remain silent on the decision. He expressed his hopes that the court will revoke all these death penalty decisions.

"Just like after every coup d'état, fictional charges are made up and people are punished through political charges. There is no death penalty for political crimes in the world anymore, except some countries," Arınç said.

He echoed the government's sentiment that Turkey is concerned about the death penalties. "I assume that after el-Sisi is elected as president [he will] forgive the rest of those people who were sentenced to death with his personal authority.

"I believe that Turkey showed the required reaction [against death penalties]. But, all countries with a voice in Egypt, especially the U.S. and EU member countries, should take a stance against the punishments because this is a matter of humanity," the deputy prime minister said.

Arınç further noted that disregarding the Muslim Brotherhood, denouncing its members as illegal and sentencing them to the death penalty puts the blame on Egypt. Turkish Grand National Assembly (TBMM) speaker Cemil Çiçek said the death penalties are unacceptable and if the sentences are politically motivated they should not be accepted under any circumstances.

Çiçek added that Turkey has been following the latest developments in Egypt with concern. "Turkey witnessed politically motivated death penalties in its history. As the public, we still remember those pains," he said.

In a joint press conference with German President Joachim Gauck, Turkish President Abdullah Gül harshly criticized the death penalty ruling in Egypt. Gül said, "It is not possible to accept such punishments ruled by politically motivated courts in this extraordinary period where democracy is suspended. In my opinion, those sentences are a malice for the future of Egypt."

Noting that Egypt needs stability, peace and economic development, Gül expressed his hopes that the detainees will be released and a period of democratic and free elections will start again in Egypt. Gauck said the recent Egyptian court order is "not understandable" and "worrying" for EU countries.

"We cannot understand such a domineering judgment by a temporary government to a society in transition," said, Gauck, adding that especially in transitional periods, a superior jurisdiction system should be established rather than taking revenge. He further urged European countries and Turkey to use all their diplomatic means to call for "a more measured jurisdiction system" in Egypt.