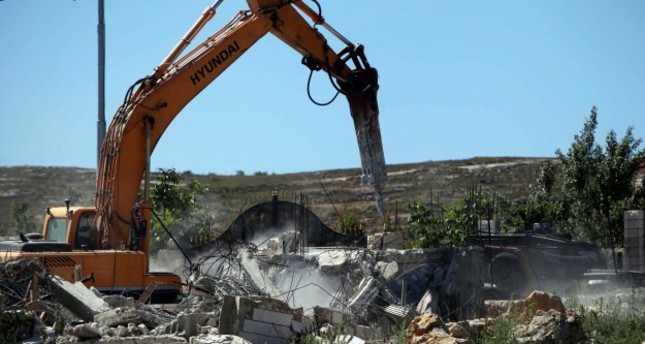 by AA May 01, 2014 12:00 am
BETHLEHEM - Israeli authorities on Thursday issued demolition orders for two Palestinian buildings and a barn in the West Bank city of Bethlehem.

"The Israelis gave the Palestinian owners 45 days to demolish the properties," Hasan Breijieh, coordinator of a local committee that opposes construction of Israeli settlements on Palestinian land, told reporters.
According to Breijieh, Israeli forces stormed Al-Khader village and presented the owners of two buildings – a car wash and a barn used for horse breeding – with official demolition orders.
There was no comment from Israeli authorities on the claim.
The U.N. Office for the Coordination of Humanitarian Affairs says that Israel demolished more than 500 Palestinian homes in the West Bank and Al-Quds (occupied East Jerusalem) last year alone.
Israeli municipal authorities impose tight restrictions on the building and renovation of Palestinian homes in "Area C" of the occupied West Bank.
According to the terms of the 1993 Oslo Accords, Area C is subject to total Israeli administrative and security control.
In a related development, Jewish settlers on Thursday uprooted 15 olive trees in southern Bethlehem.
Palestinians living in rural areas of the West Bank are frequently attacked by radical Jewish settlers.
Last Update: May 01, 2014 4:26 pm
RELATED TOPICS