Violence fails to prevent Iraqis from voting in droves 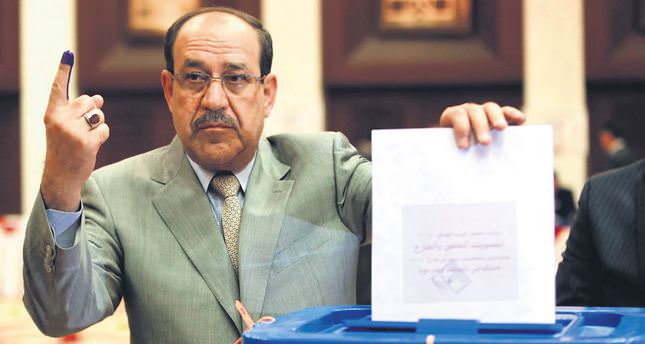 Some 21.4 million people were expected to participate in Iraq's general elections, where 9,000 candidates are competing for 328 seats. This was Iraq's first election following the withdrawal of U.S. forces in 2011

ISTANBUL — Millions of Iraqis flocked to polling stations across the country yesterday to elect 328 members of the new parliament despite weeks of intensified violence blamed on the Islamic State of Iraq and the Levant.


Iraqis flocked to polling stations across the country yesterday to elect 328 members of the new parliament. The State of Law Coalition under the leadership of incumbent Prime Minister Nouri al-Maliki is widely expected to triumph and continue his service for a third four-year term.

Security forces remained on alert throughout the election as violence around the country has reached the highest level in the last five years. Military forces worked with local police to secure poll centers and cars were banned from traffic for the day.

Sectarian tensions and violence in Iraq have led to the death of thousands of people this year. The general election was held at a time when tensions peaked in Iraq, with militants increasingly using truck bombs or launching suicide bombings. The district of Felluce in Anbar province did not participate in the election due to security concerns. Proal-Qaeda militants have held a large part of Anbar province since last January. Despite ongoing military operations ordered by the leadership in Baghdad, the Iraqi army has been unable to advance through the city center.

Anbar is awash in violence as Sunni Muslim militants challenge the Iraqi military and Shi'ite militias for territory surrounding Baghdad.

This week, Maliki vowed to stop the al-Qaeda inspired group, the Islamic State of Iraq and the Levant (ISIL), from entering Baghdad. "Are ISIL and al-Qaeda capable of reaching the target for they were established...bringing down Baghdad and the other provinces and destroying the holy shrines?...I say no," Maliki said.

"ISIL is over, but its pockets still exist and we will keep chasing them and the few coming days will witness major developments."

Professor Mustafa Sıtkı Bilgin, a Middle East expert, said, "The general elections of April 30 took place in Iraq under the shadow of ethnic and sectarian apprehensions. About 37 different coalition groups participated in these elections, which are very important for Iraq since the ethnic and sectarian tensions between Sunnis, Shias and Kurds have risen in recent periods. The security issue is also high on the agenda in Iraq and because of this reason the elections weren't held in the city of Felluce in the Anbar region. As public discontent is on the rise because of political and security dissatisfaction, it seems that the current Iraqi Prime Minister, Nuri al Maliki, is going to lose his power. But the handicap remains that there is no alternative effective leader to him.Because of this, Maliki's Party, the Coalition of State Law, still remains a strong candidate in the elections."

On Monday 50 people were killed in attacks around Iraq, including attacks involving suicide bombers dressed in police and military uniforms.The burden falls particularly hard on Iraq's Sunni population, who are viewed with suspicion by the mostly Shiite Iraqi security forces and terrorized by the ISIL.

Apart from the Shia and Sunni split, there is the conflict between the Kurdistan Regional Government and the central government in Baghdad.The underlying reason for the present tension and conflicts in Iraq is the reshaped political structure.After the Iraq War, the main factor shaping the political structure has been "sectarianism." Powers of the former state regime, Sunni Arabs were significantly excluded from Iraqi politics in the course of the U.S. occupation.

In the 2005 general elections, the separation of electoral camps into pro-Shia and pro-Sunni were examples of the tension and disagreement between religious sects. The Sunnis and Shiite tried to come together under secular and liberal political structures since there was not any other political actor bringing stability to the country. However, their attempt could not prevent the sectarian split. The Syrian civilian war is one of the most important factors triggering the split. Turning into a war of religious sects, the conflict in Syria has deepened unsustainability in Iraq. Sunnis reacted against allegations that Maliki exploited Iraq to avoid the toppling of the Assad regime in Iran.

Iraq's political system is based on a political structure, including two main religious sects and ethnic infrastructure of Arabs, Kurds and Turkmens. The year 2013 was recognized as the bloodiest period since 2008 but in the new year violence has continued.