Votes being counted but new Iraqi government months away 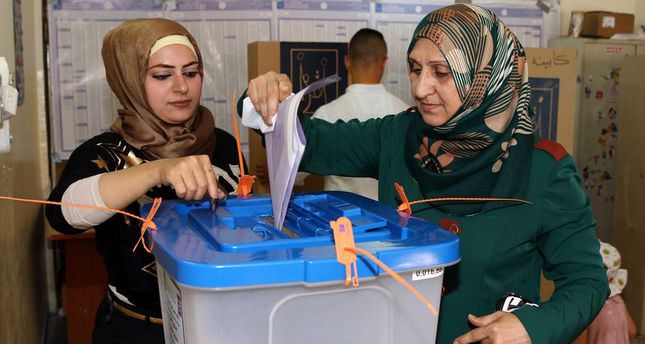 by Anadolu Agency May 02, 2014 12:00 am
IRAQ — Vote counting was underway yesterday following Iraq's relatively peaceful elections, but with results not due for weeks and parties bitterly divided, forming a new government is expected to take months. The country's divisive Prime Minister Nouri al-Maliki, who is seeking a third term in power, has said he is "certain" of victory but to retain the top job he must court disaffected parties within his own Shiite community, as well as Sunnis and Kurds who have angrily voiced opposition to his rule. Many ordinary Iraqis, meanwhile, have voiced frustration with a marked deterioration in security, rampant corruption, high unemployment and what critics of the government say is insufficient improvements in public services.

Preliminary results from Wednesday's elections are not expected for at least two weeks. Initial figures from the election commission said nearly 60 percent of Iraq's 20 million eligible voters cast ballots. Turnout in the last election in 2010 was 62 percent.

Much as was the case following previous elections, forming a government is likely to take months.

While al-Maliki's bloc is tipped to win the most seats, no single party is expected to win a majority on its own and Iraq's various political alliances and communal groups will have to form coalitions.

Complicating matters further is the fact that the three main positions of power - the president, typically a Kurd; the prime minister, normally a Shiite; and the speaker of parliament, usually a Sunni Arab - are often negotiated as an encompassing package.

The Iraqi government has "fulfilled its promise" to hold parliamentary polls on time despite recent militant activity and sectarian tension, Prime Minister Nouri al-Maliki said Thursday. "We have fulfilled our promise to [the people] to hold parliamentary elections on time and provide a [suitable] atmosphere for competition," al-Maliki said in a press statement. "We faced the rumors promoted by terrorists and others who had hoped to derail the elections," he added.

Wednesday's general election, the first since U.S. troops withdrew in late 2011, came amid a protracted surge in nationwide bloodshed that has left more than 3,000 dead already this year. The bloodletting continued on election day, when 14 people were killed, including two election workers.
But a security clampdown meant the level of violence was lower than in the preceding two days, when in all nearly 90 people died, with Washington and the U.N. hailing the vote as a broadside to extremists trying to derail the political process.

U.S. Secretary of State John Kerry said Iraqis had "courageously voted," sending "a powerful rebuke to violent extremists" in Iraq and the region.

The U.N. Security Council urged Iraq's leaders to form a government "that represents the will and sovereignty of the Iraqi people" as soon as possible.

The Security Council, in a statement, stressed "no act of violence or terrorism can reverse a path toward peace, democracy and reconstruction in Iraq, underpinned by the rule of law and respect for human rights, which is supported by the people and the government of Iraq and the international community."