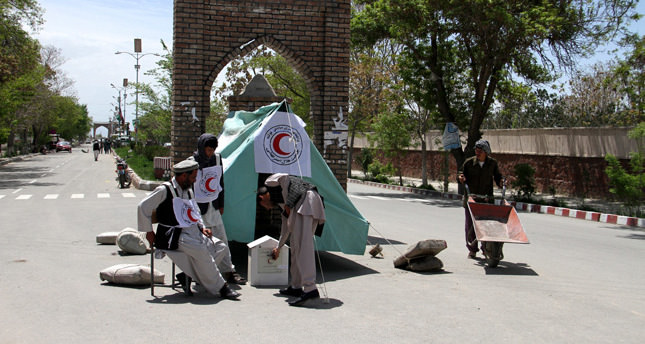 by Anadolu Agency May 05, 2014 12:00 am
Aid groups yesterday rushed to reach survivors of a landslide in northern Afghanistan that entombed a village, killing hundreds of people and leaving 700 families homeless in the mountains. Much of Aab Bareek village in Badakhshan province was swallowed on Friday by a fastmoving tide of mud and rock that swept down the hillside and left almost no trace of 300 homes.

Government officials said the current death toll was at least 300 and warned it could rise by hundreds more, after initial reports suggested that as many as 2,500 people may have died.

Large crowds gathered at the remote disaster site where rescue efforts were abandoned due to the volume of deep mud covering houses.
Only a few dead bodies have been pulled from the debris. "Around 1,000 families are thought to have been affected with some 300 houses totally destroyed," the United Nations Office for the Coordination of Humanitarian Affairs said in a statement, adding, "Assessments to determine priorities on immediate child protection and water, sanitation and hygiene needs for (displaced) families are continuing."
It added that 700 families were displaced, with many fleeing their homes in fear that the unstable hillside could unleash more deadly landslides.

Tents, emergency food supplies, health services and support for children who lost parents were being organized after many survivors spent another night in the open.

He said the packages contained food, rugs, blankets and kitchen utensils, adding that the foundation would continue to provide aid to the area.

Early Friday afternoon, a massive landslide triggered by recent heavy rainfall swallowed a village, burying thousands under mud and rock.
Approximately 300 families have been buried under earth as a result of the landslide, while only 255 of the dead bodies have been identified so far.

Heavy rains in the last few weeks have also caused flash floods in the northern parts of the country, killing dozens of people and damaging hundreds of houses.

Afghanistan held a national day of mourning on Sunday after President Hamid Karzai expressed his condolences to those who had lost loved ones.

The landslides follow recent severe flooding in other parts of northern Afghanistan, with 150 people dead and 67,000 people affected by floods in Jowzjan, Faryab and Sar-e-Pul provinces.