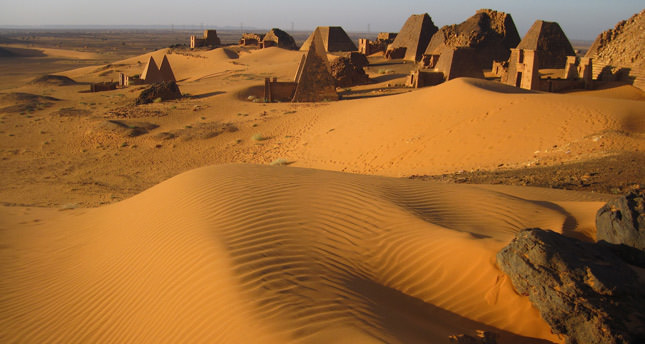 An unprecedented $135 million (TL 283.3 million) project funded by the Gulf state of Qatar aims to help the deserts of northern Sudan to reveal their 2,000-year secret

EL-KURU — With wheelbarrows, pulleys and shovels, sweating laborers have unearthed the remains of pyramids, temples and other ancient monuments in Sudan. But much of the country's rich archaeological heritage still remains hidden and what has been discovered remains little known to outsiders. "Archaeologists had a dream that this site would attract more interest," Abbas Zarook said at the Napatan ruins of El-Kurru, about 300 kilometers northwest of the capital Khartoum. He heads a Sudanese-American mission excavating the site.

Zarook said the Qatari funding, a five-year project announced in March, will support further discoveries at El-Kurru and elsewhere. "Without the Qatari donation, no one knows how long this knowledge would have been hidden," he said. El-Kurru and more than two dozen other archaeological projects, spread over hundreds of kilometers along the Nile Valley, will benefit from Qatar's support, officials say. "I don't think we will find everything hidden in five years, so we hope this funding will be extended," Zarook told journalists invited to see some of the sites that will benefit from the new funding, the largest ever for Sudanese antiquities. It will support projects by several foreign and Sudanese teams in northern Sudan, where the first archaeological digs took place only about 100 years ago. That was much later than in Greece or Egypt, where the pyramids are grander and much better known.

Last year, fewer than 600,000 tourists visited war-torn Sudan, where El-Kurru and other ancient cemeteries are among the few attractions. By comparison, the much older monuments at Luxor, on the banks of the Nile in southern Egypt, have drawn millions of visitors annually. The Napatan civilization, which emerged after 900 B.C., extended its influence north to Luxor and then briefly conquered all of Egypt. A royal burial site, including the remains of a pyramid for the powerful Napatan king Piangkhi, is part of a vast UNESCO World Heritage site that includes El-Kurru. Zarook's Sudanese-American team is still unraveling El-Kurru's mysteries, about a century after the first excavations. "We are trying to preserve what has been found before and to discover what remains hidden," Zarook said at the site near a farming village. Qatar's funding will help restore some monuments, while also protecting the fragile archaeological sites and improving information for tourists. The National Museum in Khartoum will be modernized in addition to two presentation and conference centers built at Gebel Barkal and Meroe, whose pyramids and temples are on UNESCO's
World Heritage list.