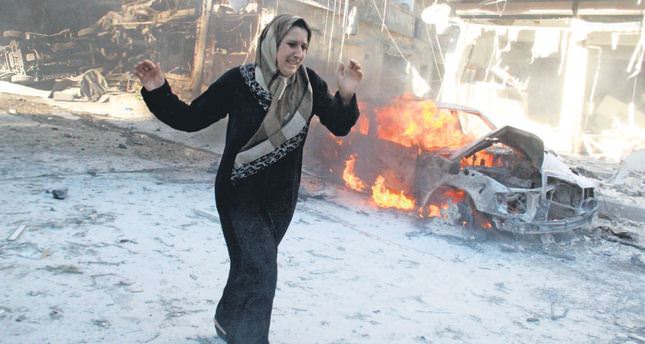 The diplomatic recognition of the Syrian National Council as a foreign mission by the U.S. government is of significance as experts warn that there have been no promising solutions to end the brutal war in Syria

WASHINGTON D.C. — The U.S. announced that the representative offices of the Syrian National Coalition (SNC) in Washington and New York are now recognized as "foreign missions" under U.S. law. It also announced a plan for a $27 million increase in non-lethal support to opposition rebels, which would increase total U.S. assistance to around $287 million. U.S. State Department spokeswoman Marie Harf stressed in a daily press briefing on 5 May that the recognition would only lead to a symbolic change to formalize the relationship between the U.S. and the council. "This is not, obviously, tantamount to recognition of the SOC as the Government of Syria. It's a reflection of our partnership with the coalition as the legitimate representative of the Syrian people."

Experts believe that the aim of the latest move is to enhance the capabilities of the Free Syrian Army (FSA) and strengthen the Syrian opposition before the presidential election takes place in June 3. Syrian President Bashar Assad, who has been in office since 2000, registered to run for re-election. Even though his chances of becoming president are extremely high, this would not lead to an end to the ongoing war in the country.

U.S. efforts to reinforce the opposition's hand with additional measures is appreciated by the Syria opposition. The head of the coalition, Ahmad Jarba, stated during his visit to Washington that the new diplomatic status should be considered a "diplomatic platform for the coalition to advance the interests of the Syrian people at all levels." However, he highlighted that extra military assistance is required for rebel groups fighting to oust Assad from power.

In accordance with Jarba's statement, it is expected that upgrading the status of the Syrian opposition would facilitate relations between the U.S. and the Syrian population residing within U.S. territory. This diplomatic recognition would also provide greater say within the international community. "This is a very significant recognition for the future of Syria," said Halit Hoca, Turkey's representative of the SNC. "These diplomatic measures taken by the U.S. government are of significance but the problem in Syria still remains the same when it comes to military assistance to rebel groups. There are no weapons to use in our hands against the Syrian army. Assad did not want to be a part of the diplomatic process while taking more military measures to fight against rebel groups, which makes the diplomatic resolution almost impossible between Assad and the rebels."

So far, diplomatic initiatives by the U.S. and Russia to end the war have not had a powerful impact and have failed to halt the ongoing violence in Syria. The Western-backed Syrian opposition still demands more sophisticated antitank and anti-aircraft weapons to fight against Assad's army. However, only non-lethal aid has been delivered to rebel groups due to an EU veto to more advanced military assistance.

Even though there has been considerable nonlethal aid from the U.S., there is no signal that the civil war will come to an end in the years to come. The latest measures taken by the U.S. prove that there have been no clear or strong steps taken to end the Syrian civil war.
In addition, U.N. General Assembly resolutions on the Syrian civil war prove that it is impossible for member states to meet on common ground while there is no political stability within the decisions made during the meetings. The current situation in Syria's Idlib, where about 30 Syrian government fighters were killed during bombings, is an indication of insufficient sanctions applied by the international community over Syria.

According to reports, more than 150,000 people are believed to have been killed as the conflict enters its fourth year. The war began as a peaceful protest movement and turned into a civil war with heavy suppression of protests by the Assad regime. International powers, so far, have not been able to come to any conclusion as to how to resolve the conflict, further complicating the violent atmosphere that has killed thousands of fighters. This civil war also led to many people fleeing Syria as refugees. U.N. reports show that the number of Syrian refugees residing both inside and outside camps is expected to increase. So far, more than 2 million Syrians have fled to neighboring countries and another 2 million will become refugees in 2014, with a further 2.25 million to be displaced in the country unless necessary measures are taken by the international community. The recent developments show that the U.S., EU and U.N. are far from finding a solution to put an end to the ongoing violence.