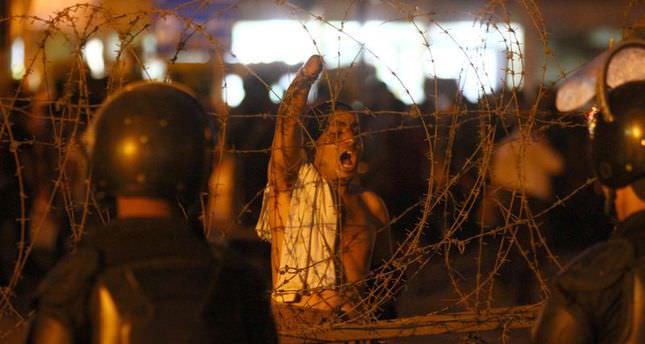 Pro-democracy supporters staged a rally and organized a human chain in the Nile Delta province of Sharqiya against al-Sisi's plans to run in Egypt's upcoming presidential elections on May 26-27.

Protesters chanted slogans against the military and police.

Similar rallies set out in eastern Cairo and the central province of Fayoum, amid hostile chants against the military-backed authorities.
Pro-democracy supporters also demonstrated in the central Beni Sueif province to denounce what they describe as "security oppression" and to call for the release of detained supporters of the ousted president.

Similar protests were staged in the coastal city of Alexandria and the southern Minya province.

Friday's rallies were part of a "third revolutionary wave" called by the pro-Morsi National Alliance for the Defense of Legitimacy to call for a boycott of Egypt's presidential elections.

Al-Sisi, who led the army to remove Morsi from power, and leftist politicians Hamdeen Sabahi are vying in the polls.
Egypt has been dogged by instability since the army unseated Morsi, the country's first freely elected leader, last July following massive protests against his presidency.

Pro-democracy protesters have staged almost daily rallies ever since to demand his reinstatement.