At least 60 dead in fresh fighting in Syria 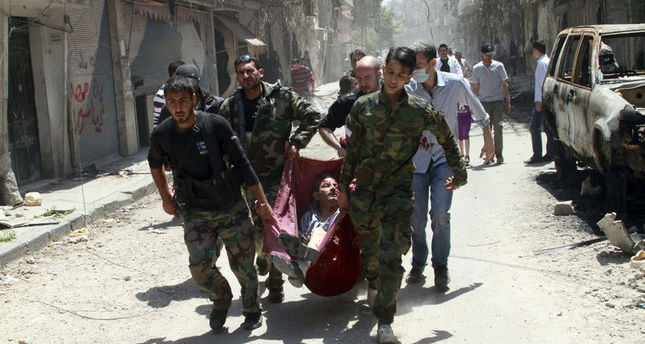 by AA May 11, 2014 12:00 am
ALEPPO - At least 60 people were killed, including 18 children and five women, by Syrian regime forces during air and ground attacks, Saturday, according to the London-based Syrian Network for Human Rights.

Bashar al-Assad's forces killed 24 people in Aleppo, 14 in the suburbs of Damscus, nine in Daraa, four in Hama, three each in Latakia, Homs and Deir-ez Zor, the network said.
Residential areas were also destroyed after barrel bombs were dropped around Aleppo, driving residents out to safer zones, according to the Local Coordination Committees of Syria, a network of local opposition groups.
The committee also said Idlib, Latakia, Daraa and some districts of Damascus have seen intense air strikes over opposition-held areas.
Meanwhile, Syrian security forces "neutralized" a large number of armed groups during operations and their vehicles were demolished, said Syria's state-run SANA news agency.
Syria has been gripped by almost constant fighting since the regime launched a violent crackdown in response to anti-government protests in March 2011, triggering a conflict, which has spiraled into a civil war.
The UN has stopped updating its death toll for the country after an official count became too difficult to ascertain, but at least 100,000 deaths were recorded in its last official count.
Nearly 2.5 million Syrians are also registered as refugees in neighboring countries, including Turkey, Lebanon and Iraq.
Last Update: May 11, 2014 12:15 pm
RELATED TOPICS