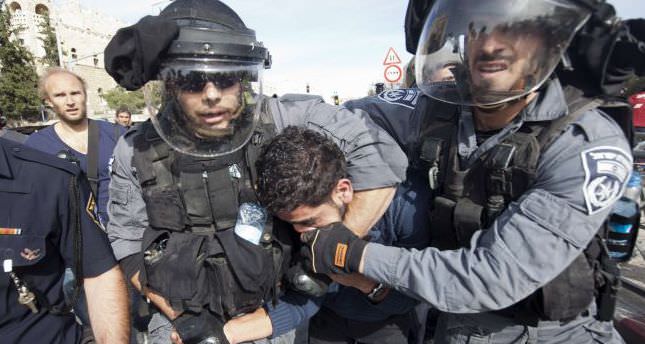 by Anadolu Agency May 12, 2014 12:00 am
JERUSALEM — Scores of Palestinian students were injured in Monday clashes with the Israeli army near Al-Quds University in the town of Abu Dis east of Al-Quds (occupied East Jerusalem), local activists have said.

"Five Palestinians were injured by rubber bullets and dozens suffered teargas inhalation during clashes near Al-Quds University," spokesman for the Popular Resistance Committees in Abu Dis Hani Halabiyeh was quoted by the Wafa news agency as saying.

According to the news agency, Israeli forces stormed the vicinity of the university after students made a hole in a nearby separation barrier.

Israeli forces besieged the university campus and used teargas to disperse the students, forcing a large number of them to leave the campus, the news agency added.

"Israeli forces scaled the buildings around the university, while clashes remain ongoing in the town," Halabiyeh said.

Israel occupied the Palestinian city of Al-Quds during the 1967 Middle East War. It later annexed the holy city in 1980, claiming it as the capital of the new self-proclaimed Jewish state – a move never recognized by the international community.