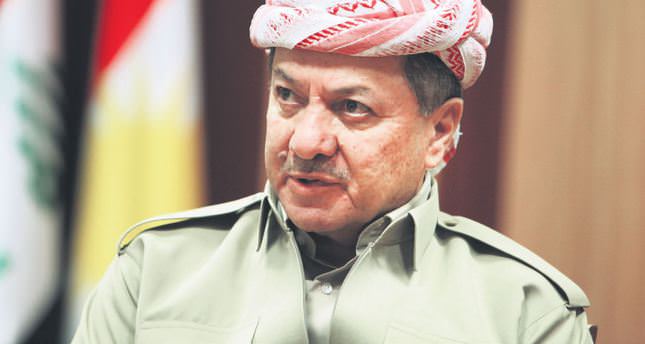 The president of Iraqi Kurdistan, Masoud Barzani, said Iraq had been led in an authoritarian direction by Prime Minister Nuri al-Maliki and threatened to end the oil-rich autonomous region's participation in the federal government

ARBIL — President of Iraqi Kurdistan Masoud Barzani said Iraq had been led in an authoritarian direction by Prime Minister Nuri al-Maliki and threatened to end the oil-rich autonomous region's participation in the federal government. Iraq held elections on April 30. The results have yet to be announced but Kurdish support is crucial to Maliki's ambitions for a third term.

The incumbent premier's rivals, both Shi'ite and Sunni, are hoping Barzani and the Kurds will help them thwart Maliki's bid to stay in office for four more years. Barzani said Kurdish parties would meet as soon as the results of the election were officially announced, expected in the next few days, to decide how to proceed in negotiations over the government formation.

The talks could drag on for months and Barzani declined to give any more details of the Kurds' position but said the political situation in Iraq was unsustainable and one option would be to fully withdraw Kurdish participation in the government unless there was the prospect of change. "All options are on the table," Barzani told Reuters in an interview on Monday. "It is time for final decisions. We are not going to wait another decade and go through the same experience again. If we boycott the process, we will boycott everything (parliament and the government)."

Such a move would be the first of its kind for the Kurds, who have been a partner in the national government since the U.S.-led invasion of Iraq in 2003, and would put added strain on the country's already fraying federal unity. There are about 5 million Kurds in majority Arab Iraq, which has a population of more than 30 million. Most Kurds live in the north of the country, where they run their own affairs, but remain reliant on Baghdad for a share of the national budget.

The Kurds eventually lined up behind Maliki after the last election in 2010, helping him win a second term, persuaded by promises to share power and settle the status of territories disputed by Arabs and Kurds. However, the Kurds say those promises were broken and the deal unravelled almost as soon as the government took office. Relations between the two sides rapidly deteriorated thereafter and are now characterized by deep mistrust.

Barzani then threw his weight behind an unsuccessful attempt to unseat Maliki with a vote of no confidence in 2012, and must now work out how to ensure Baghdad keeps any promises it makes if the Kurds agree to share power again. Barzani declined to go into the details of how the Kurds planned to guarantee their demands are met, but he said he would be seeking more than paper guarantees.

Barzani conceded Maliki was not solely to blame for Iraq's troubles, but said as prime minister and commander in chief of the armed forces he ultimately bore the responsibility. "There was no partnership, and it was totalitarianism," said Barzani of governance in Iraq under Maliki over the past four years. "He is the number one responsible for it. He was capable of not allowing the whole process to go in that direction." "The authorities in Baghdad want to control everything ... It is not acceptable to us. We want to be partners; we don't want to be subjects."

Barzani emphasized repeatedly his dispute with Maliki, who once fought against deposed dictator Saddam Hussein alongside the Kurds, was "not personal", said he had changed since becoming Prime Minister. "The Maliki that we knew before being in power was different than the Maliki who has been in power," he said.

Despite the hostilities, some Kurdish officials admit in private a deal could be reached with Maliki, if only to buy time while their region, no longer believing in an alliance with Baghdad, pulls away. The Kurds are already moving towards economic independence and late last year finished building an oil pipeline to Turkey that could in theory make them self-sufficient, further riling Baghdad, which slashed funding to the region in revenge. "Those who cut the budget of Kurdistan are going to pay the price of that decision,"

Barzani said. "If by cutting the budget and blackmailing us they think the Kurds will not continue asking for their legitimate demands, they are wrong."

The Kurds say they are constitutionally entitled to export oil on their own terms, and more than 2 million barrels have already flowed through the new pipeline into storage tanks at a Turkish port. Baghdad has threatened dire consequences if exports go ahead without federal consent, but Barzani said there was no going back. "The political decision has been made that we're going to sell oil independently," he said. "We will continue producing the oil, pumping it out and selling it. If they continue escalating, we will also escalate from our side."

Barzani made clear that the Kurds could hold a referendum on independence if Baghdad pushed them too far, repeating a threat he has made in the past. "If they don't like us to be with them, they should tell us and we will take another path as well," he said. "We are going to have a referendum and ask our people. Whatever the people decide."

Maliki may seek to exploit divisions among the Kurds themselves to weaken their bargaining position in Baghdad, by courting the Patriotic Union of Kurdistan (PUK), which is seeking to reassert itself after political setbacks.

Some Kurdish officials worry that the PUK, which has shared power with Barzani's own Kurdistan Democratic Party (KDP) since the region gained autonomy could threaten to break ranks and join with Maliki in order to regain leverage at home. But Maliki is also facing a challenge in the Sunni heartland province of Anbar, where his army has been waging war since the start of the year, when tribal fighters and Islamist insurgents overran several towns.

Maliki's critics, including Barzani, accuse him of going on the offensive against Iraq's Sunni minority to whip up support among his own Shi'ite base as security deteriorated across the country, damaging his credentials. "To ignite a war in order to achieve political gains is a catastrophe," Barzani said. "I do believe it (the situation in Anbar) ended up like that. Maybe in the beginning it was a different story." Asked whether he was concerned the offensive in Anbar could set a precedent for dealing with similar problems in other parts of the country, Barzani said: "In any country, if they pursue that strategy, that means the end of that country." "That will be the end of Iraq, and that is the most dangerous issue."