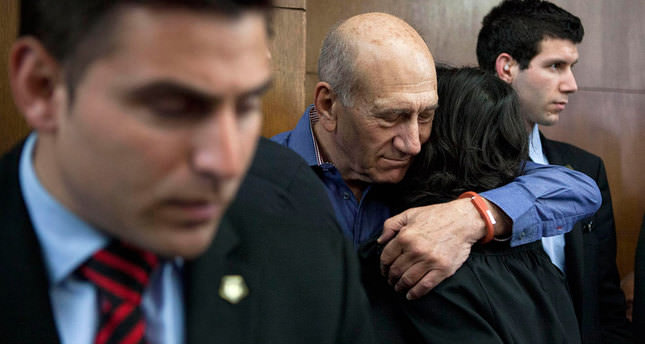 by May 13, 2014 12:00 am
TEL AVIV — Ex-Prime Minister Ehud Olmert was sentenced to six years' imprisonment on Tuesday for taking bribes, in a corruption case that resulted in the first criminal conviction of a former head of government in Israel.

Olmert, a centrist credited internationally with working towards a peace settlement with the Palestinians, had denied wrongdoing in a real estate deal that took place while he was in his previous post of Jerusalem mayor.

His attorneys were expected to ask the Tel Aviv court that passed sentence to allow Olmert, 68, to remain free until the Supreme Court rules on an appeal against his March 31 conviction, a process that could take months.

Two years ago, the veteran politician was acquitted of most of the major charges brought against him in separate cases involving his links to a U.S. businessman.

Those corruption allegations forced Olmert's resignation as prime minister in 2008, and his acquittal had appeared to position him for a possible political comeback.

But in the new corruption trial, Judge David Rozen found Olmert guilty of two bribery charges and said he accepted 500,000 shekels ($144,000) from developers of the Holyland apartment building complex in Jerusalem and 60,000 shekels ($17,000) in a separate real estate project.