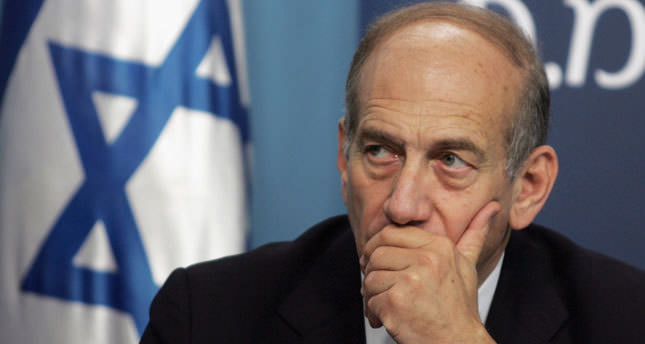 by Associated Press May 13, 2014 12:00 am
TEL AVIV, Israel — An Israeli court sentenced former Prime Minister Ehud Olmert to six years in prison for his role in a bribery scandal, capping the stunning downfall of a politician who just a few years ago hobnobbed at the White House and claimed to be close to reaching a historic peace agreement with the Palestinians.

Olmert, the first prime minister sentenced to prison, is set to become the latest in a string of top Israeli politicians to serve time for serious crimes. The scandals have fueled a feeling of public sorrow over the state of the country's political system mixed with relief that no one is above the law.

"It's not an easy day," said Justice Minister Tzipi Livni, who served as Olmert's foreign minister, adding that the decision nonetheless sent an important message. "I have full faith in the court and the law enforcement system, and that's how the Israeli public should feel too," she said.

Olmert was convicted in March in a wide-ranging case that accused him of accepting bribes to promote a controversial real-estate project in Jerusalem. He was charged for acts while he was mayor of Jerusalem and national trade minister, years before he became prime minister in 2006.

Olmert has denied wrongdoing, and his lawyer said they would appeal Tuesday's sentence to the Supreme Court.

The six-year sentence was the maximum sought by prosecutors. Olmert also was ordered to pay a $290,000 fine. Judge David Rozen, a Tel Aviv district court judge, accused Olmert of undermining the public's trust as he delivered the punishment.

"A public servant who accepts bribes is akin to a traitor," Rozen said. "This is a man who was on top of the world. He served as prime minister, the most important position, and from there he reached the position of a man convicted of criminal offenses."

Olmert appeared stunned as he walked out of the courthouse without speaking to reporters. Rozen ordered him and several co-defendants to report to prison on Sept. 1.

His spokesman, Amir Dan, said an "unjust verdict" was delivered against an innocent man. He described Olmert as "a man who never took bribes, who contributed so much to the country."

The sentencing sealed the downfall of a man who over four decades transformed himself from a sharp-tongued backbencher in the hard-line Likud Party into a global statesman whose push for peace with the Palestinians was cut short by his legal troubles.

Olmert was a longtime fixture in Israel's hard-line right wing when he began taking a more moderate line toward the Palestinians when he was deputy prime minister a decade ago. He played a leading role in Israel's withdrawal from the Gaza Strip in 2005.

He became prime minister in January 2006 after then-Prime Minister Ariel Sharon suffered a debilitating stroke. He subsequently led their newly formed Kadima Party to victory in parliamentary elections on a platform of pushing further peace moves with the Palestinians.

A gifted orator, Olmert crossed a series of taboos while in office warning that Israel could become like apartheid South Africa if it continued its occupation of the Palestinians and expressing readiness to relinquish control of parts of the holy city of Jerusalem as part of a peace deal.

Olmert led his government to the Annapolis peace conference in November 2007 launching more than a year of ambitious, but unsuccessful peace talks with the Palestinians. Olmert enjoyed a warm relationship with then U.S. President George W. Bush.

Olmert has said he made unprecedented concessions to the Palestinians during those talks and was close to reaching an agreement at the time of his resignation, though the Palestinians have said his assessment was overly optimistic.

Despite his ambitious agenda, Olmert's term was clouded by the kidnapping of an Israeli soldier who was captured by Gaza militants in a cross-border raid and an inconclusive war against Hezbollah guerrillas in Lebanon. Both incidents occurred shortly after he took office. Olmert also launched a military invasion of the Gaza Strip in late 2008 that drew heavy international criticism.

But it was corruption allegations, which had dogged him throughout his career, which ultimately proved his undoing. He was forced to announce his resignation in late 2008 and left office early the following year.

Olmert also faced a trial on separate charges of accepting illicit funds from an American supporter and double-billing Jewish groups for trips abroad. In that case, he was cleared in 2012 of the most serious charges but convicted on a lesser count of breach of trust for steering jobs and contracts to clients of business partners and got a suspended one-year sentence.

That verdict was seen as a moral victory, and Olmert had signaled an intention to return to politics if he could beat the charges in the real estate scandal. He had been seen as one of the few politicians capable of mounting a challenge as a centrist alternative to Prime Minister Benjamin Netanyahu.

But following Tuesday's sentencing, any hopes of a political comeback appear to be over.

Emmanuel Gross, an expert on criminal law at the University of Haifa, said Olmert's appeal has little chance of success. He said the prison sentence, while somewhat high, still fell within standard legal norms, and said the Supreme Court does not typically overrule a lower court's factual findings.

"I don't think he has a good chance to convince the Supreme Court to change the verdict," Gross said.

Olmert now appears set to join a former Israeli president, ex-Cabinet minister and several lawmakers who have all gone to prison in recent years.

Aharon Franco, commissioner of Israel's prison service, said his agency has begun discussions in recent weeks on how to prepare for Olmert's arrival. He called it an "exceptional case" and said officials would have to consider his safety and privacy.

"It is a sad day. What else can I say," President Shimon Peres said during an official visit in Norway.