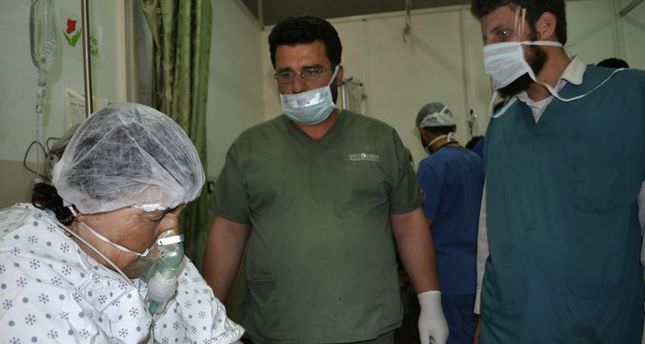 by AA
May 13, 2014 12:00 am
NEW YORK — There is strong evidence that the Syrian army used chemicals weapons on three towns in northern Syria in mid-April 2014, said Human Rights Watch on Tuesday.

"These attacks used an industrial chemical as a weapon... the Syrian government is the only party to the conflict with helicopters and other aircraft," said the watchdog.

On April 11, Assad's regime and rebel groups exchanged accusations over a poison gas attack in the opposition-held village of Kfar Zeita, in the west-central province of Hama, 200 kilometers (125 miles) north of Damascus.

"Syria's apparent use of chlorine gas as a weapon -- not to mention the targeting of civilians -- is a plain violation of international law. This is one more reason for the UN Security Council to refer the situation in Syria to the International Criminal Court," added the group.

According to the watchdog, eyewitnesses told them that chlorine canisters were embedded into crude explosive-laden barrels, which military helicopters dropped at the time on rebel-held areas.

On April 21, both French President Francois Hollande and French Foreign Minister Laurent Fabius said there are "several signs" that Syrian President Bashar al-Assad is still using chemical weapons against his people despite an agreement to destroy the regime's toxic arsenal before 30 June.

But at the time, Hollande acknowledged that his government has "no clear proof" that this is the case.

On April 29, the director-general of the Organization for the Prohibition of Chemical Weapons (OPCW) announced a new mission to establish facts surrounding allegations of the use of chlorine in Syria.

Syria has declared some 1,300 metric tons of chemical substances and raw materials for bomb making, of which 86.5 percent has been removed from Syria for destruction as of April 22, according to the OPCW.

A U.S. State Department spokesperson has stated that chlorine was not among the priority-one or -two chemicals that Syria declared to the chemical weapon organization in its chemical weapons stockpile.

On Sunday, the U.S. urged both Syria and Russia to ensure that the remaining stockpile of Syrian chemical weapons is handed over to the UN inspectors for destruction.