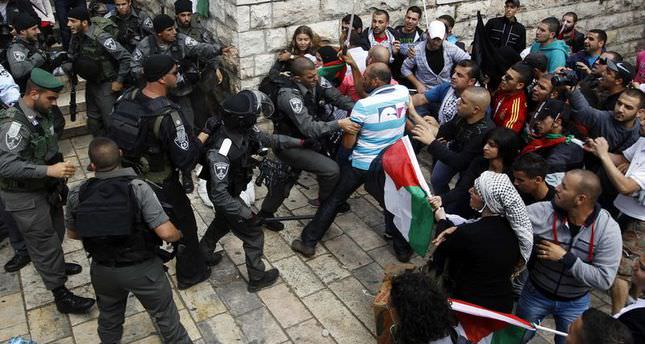 by AA May 15, 2014 12:00 am
RAMALLAH — Clashes erupted Thursday in the West Bank between Palestinians marking the 66th anniversary of Israel's creation and Israeli forces.

Israeli forces used teargas and rubber bullets to disperse Palestinian protesters who gathered at the Qalandiya checkpoint in Ramallah.

Clashes also broke out in the West Bank city of Bethlehem between Palestinian demonstrators and Israeli forces.

Israeli army troops deployed in the West Bank were in a state of alert for the Nakba anniversary.

A 1947 U.N. General Assembly resolution stipulated the creation of independent Arab and Jewish states in what was then British-mandated Palestine.

Around 800,000 Palestinians were subsequently displaced and 500 Arab villages destroyed in attacks by armed Jewish groups at the time.