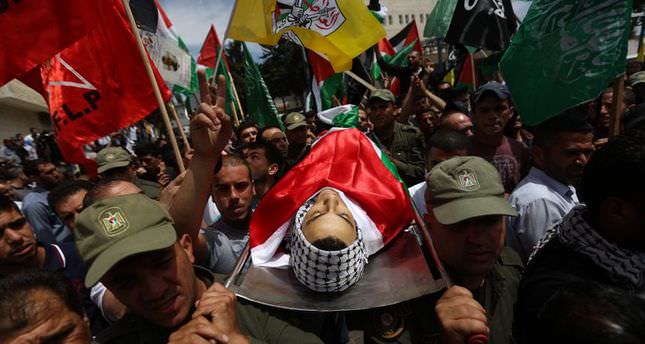 by Anadolu Agency May 16, 2014 12:00 am
WEST BANK —Thousands of Palestinians on Friday took part in a massive funeral for two Palestinians killed by Israeli troops in the West Bank city of Ramallah one day earlier.

Mohamed Odeh Abu Thaher, 22, and Nadeem Siyam Nowara, 17, were killed in clashes with Israeli forces near Ofer Prison during a rally marking the 66th anniversary of Nakba ("catastrophe"), which marks Israel's creation in 1948.

Mourners chanted slogans for taking revenge for Israeli "crimes" against the Palestinians.

Ibrahim Nowara, a relative of the two dead Palestinians, called on the Palestinian Authority to join U.N. agencies to pave the way for trying Israel before international courts.

A 1947 U.N. General Assembly resolution called for the creation of independent Arab and Jewish states in what was then British-mandated Palestine.

Around 800,000 Palestinians were subsequently displaced and 500 Arab villages destroyed in attacks by armed Jewish groups at the time.