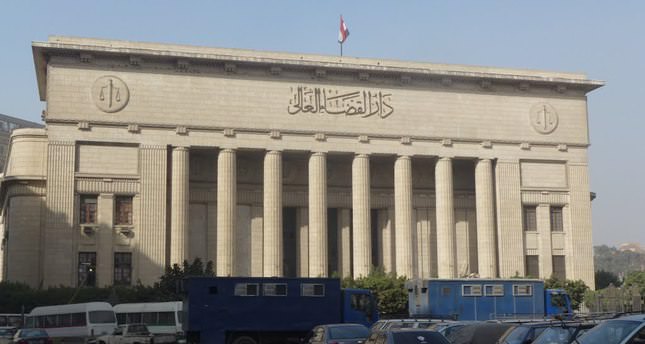 by Anadolu Agency
May 18, 2014 12:00 am
CAIRO - An Egyptian court on Sunday sentenced 126 supporters of ousted president Mohamed Morsi to ten years in prison for involvement in violence in the Nile Delta province of Kafr al-Sheikh in August of last year.

The court also gave six minors a suspended one-year sentence for involvement in the same events.

The sentence, however, can be applied to the boys if they commit a similar crime within the next three years, the court said.

The defendants chanted "down with military rule" as Judge Hassan Fareed read out the sentences at the court convened at a police academy in Cairo, a witness said.

The defendants were accused of rioting, possessing bladed weapons and damaging public properties following the August 14 bloody dispersal, by security forces, of two pro-Morsi protest camps in Cairo and Giza. The charges against the defendants included "membership of a terrorist group."

The dispersal left hundreds of protesters killed and thousands wounded.

Sunday's verdicts, which drew immediate condemnation from the defendants and their families, can be appealed at a higher court.

The same court slapped a minor with a three-year jail term for involvement in the same case, according to Anadolu Agency reporter.

The court convicted all 38 defendants of possessing explosives and using them, damaging public properties and joining a "terrorist" organization.

It also charged them with attacking policemen and possessing firearms.

Morsi's supporters staged protests inside two Cairo metro stations in October before policemen arrested 38 of them, including the minor.
Sunday's verdicts can be appealed at a higher court.

Egyptian authorities have launched a major crackdown on the supporters of Morsi following his ouster by the army on July 3.

The interim authorities designated the Muslim Brotherhood, the movement from which Morsi hails, as a "terrorist" movement in December last year.