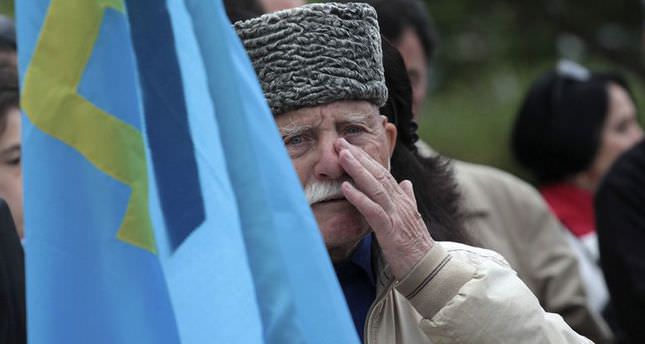 by May 19, 2014 12:00 am
SIMFEROPOL, Crimea — Defying a ban by their new Russian-backed rulers, thousands of Crimean Tatars gathered at a mosque on Sunday to commemorate the day 70 years ago the mass deportation of their families began under the orders of Soviet leader Josef Stalin.

Crimea's Muslim Tatars are among the most vociferous opponents of Russia's annexation of Crimea from Ukraine and have condemned as "inhuman" the temporary ban on mass gatherings, which was issued just days before the symbolic date in the minority group's history.

Waving blue-and-yellow flags and chanting slogans, they rallied outside the mosque on the outskirts of the capital Simferopol as Russian military helicopters circled overhead.

The 1944 Soviet-era deportation of some 200,000 Tatars to Siberia and Central Asia killed many and is a reason for Tatars' deep mistrust of the Russian authorities. Many still associate Moscow's rule with oppression, exile and suffering.

"People, homeland, Crimea!" the crowd chanted. One banner read: "Eternal remembrance for the victims of genocide - the Crimean Tatars."

Tatar community leaders, including the head of the Mejlis assembly, Refat Chubarov, and Crimea's chief mufti made an appeal to the crowd for unity from a stage in the Ak Mechet district.

"We didn't think we'd be marking the anniversary under these circumstances," Chubarov said, "I don't have a solution to our problems, but I know that we will only be respected if we are united."

Mufti Emirali Ablaev led prayers for the deceased ancestors of those present and called for dialogue with the region's new leadership.
Looking up at the helicopters, Ablaev told the crowd: "They are watching us, they are afraid of us."

In a resolution adopted at Sunday's rally, the Tatars called for Crimea to have autonomous status within Russia to protect their rights. The Tatars - who make up more than 12 percent of Crimea's population of 2 million - also demanded laws to guarantee their representation in Crimea's government.