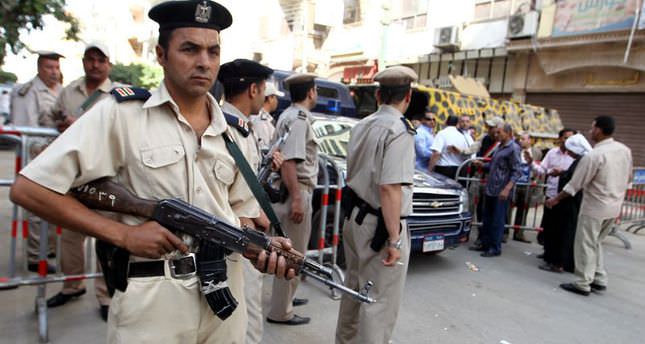 by AA
May 19, 2014 12:00 am
CAIRO — Two Egyptian policemen were killed on Monday when rebels opened fire on their checkpoint in the central Minya province, a security source said.

"Two police sergeants were gunned down when masked men showered their checkpoint with bullets on a main road linking Minya to Cairo," the source, who asked not to be named, told Anadolu Agency.

Police are currently combing nearby areas for the attackers, he added.

No group has claimed responsibility for the incident, which is the latest in a series of deadly attacks that have mostly targeted security forces since last July's military ouster of elected president Mohamed Morsi.

Two shadowy groups – Ansar Beit al-Maqdis, largely active in the Sinai Peninsula, and Agnad Misr – have separately claimed responsibility for a number of the attacks.

Egypt's military-backed government has blamed Morsi's Muslim Brotherhood – the main target of a sustained crackdown on dissent – for the attacks. The brotherhood, for its part, emphatically denies the accusations.

Egypt has been dogged by instability since Morsi's ouster last summer. Attacks, which have killed scores of police and taken a toll on the country's already ailing tourism industry, come in the run-up to presidential polls slated for May 26-27.

Abdel-Fattah al-Sisi, former army chief and key player in Morsi's ouster, is the frontrunner in the upcoming election, in which he will face off against leftist politician Hamdeen Sabahi.