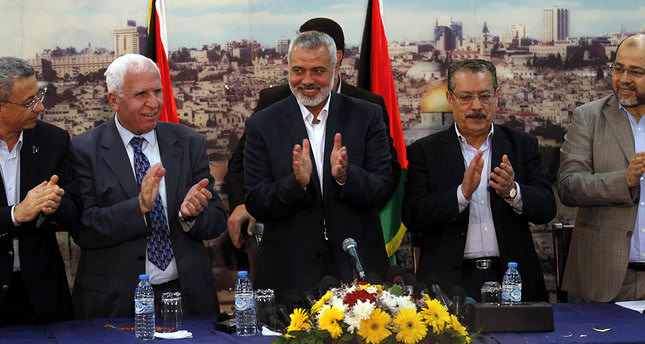 by AA May 20, 2014 12:00 am
GAZA CITY — Gaza Prime Minister Ismail Haniyeh on Monday said the Palestinian people would not forget nine Turkish activists killed by Israel in 2010 while on board a Gaza-bound Turkish relief ship.

"The Turkish activists on board the Mavi Marmara sacrificed their lives in order to break the siege on the Gaza Strip," Haniyeh said.

"Delegates that come in solidarity with Gaza contribute to breaking the Israeli siege on the strip," he said at a reception for the members of two aid convoys that arrived earlier in the coastal enclave.

Israel has blockaded the Gaza Strip since 2006, depriving the territory's roughly 1.8 million inhabitants of their most basic needs.

In May 2010, Israeli commandos killed eight Turkish nationals-and a U.S. citizen of Turkish descent-when they attacked the Mavi Marmara in international waters.

The ill-fated ship had been part of a flotilla carrying humanitarian aid and construction materials to Gaza.

The event sparked international outrage and led to a deterioration of Turkish-Israeli ties.

Since then, Turkey has received an apology from the Israeli government and the two countries are now looking to normalize relations with a deal involving compensation for the victims' families.

Haniyeh said the visit to Gaza by members of the two aid convoys had come at a time of "extremely important" developments on both the Palestinian and Arab levels.

He added that Palestinians were close to reuniting in order to counter Israeli intransigence.

On April 23, Haniyah's Hamas movement, which governs the Gaza Strip, hammered out a reconciliation deal with the rival Fatah movement, which rules the occupied West Bank.

It is hoped that the deal will end inter-Palestinian divisions and open the door for a Palestinian government of national unity.