Egyptians vote for president after years of turmoil 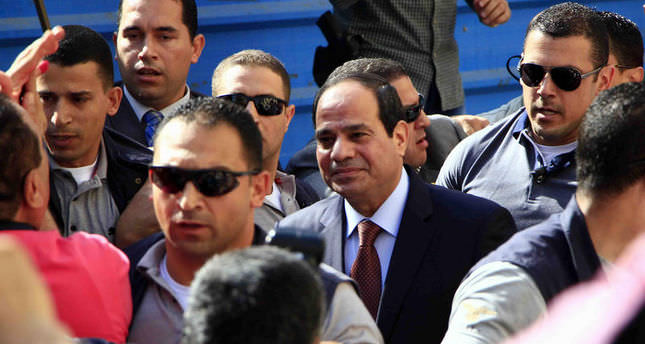 Egyptians yesterday went to the polls almost one year after the democratically elected President Morsi was deposed by Field Marshal al-Sisi, who is set to be the next president of the country where the Muslim Brotherhood is now banned.

Egyptians yesterday went to the polls almost one year after the democratically elected President Morsi was deposed by Field Marshal al-Sisi, who is set to be the next president of the country where the Muslim Brotherhood is now banned.

Egyptians went to the polls for another historic presidential election yesterday that comes nearly a year after the military ousted the nation's first freely elected president, Mohammed Morsi.

Around 54 million Egyptians were eligible to cast their ballots in the presidential election.

Sisi is expected to win the elections although many have questioned the validity of today's elections. "The Egyptians are coming out to write their history and chart their future," Sisi told reporters after he cast his ballot at a school in the upscale district of Heliopolis.

The only other candidate in the race is leftist politician Hamdeen Sabahi, who finished third in the 2012 presidential election.

The balloting is taking place amid tight security, with some 500,000 soldiers and police throwing security rings around polling centers and guarding vital installations across the nation.

Army and police helicopters hovered over Cairo as part of the massive security operation.

Nearly two hours after the polls opened at 9 a.m., there were no reports of major election- related violence.

A crude homemade explosive device was hurled from a passing car at a security personnel outside a polling center in a village close to the industrial city of Mahalla in the Nile Delta, but no one was hurt.

The vote is the second step in the post-Morsi transitional roadmap, which started with a constitutional referendum in January and concludes with parliamentary elections later this year.

Meanwhile, supporters of ousted president Mohammed Morsi took to the streets in several towns across Egypt on Monday to protest against the ongoing presidential election.

In the coastal city of Alexandria police used teargas to disperse the demonstrators. Security forces detained some of the pro-Morsi activists.
Last Update: May 27, 2014 3:25 am
RELATED TOPICS