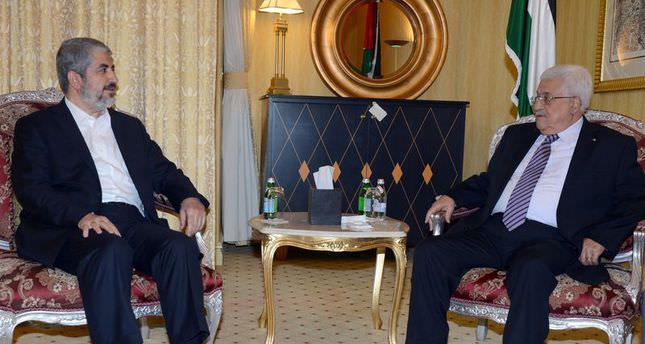 by AA May 28, 2014 12:00 am
GAZA CITY — The Palestinian Hamas movement has agreed with rival movement Fatah that Gaza Prime Minister and Hamas leader Ismail Haniyeh should serve as speaker of the currently-suspended Palestinian Legislative Council (PLC) after its anticipated reinstatement, a source close to the group said.

The source, requesting anonymity, said the agreement had come during ongoing negotiations with Fatah, which rules the occupied West Bank.

The talks are aimed at finalizing a recent Palestinian reconciliation deal that calls for the formation of a Palestinian unity government and the reinstatement of the PLC.

Earlier this week, the two groups announced that West Bank Prime Minister Rami Hamdallah had been agreed upon to head up the unity government, which is expected to be unveiled within days.

"The two groups have agreed to divide legislative and executive powers between them," the source said. "The Hamas leadership has been pushing for Haniyeh to serve as parliament speaker once he steps down from his current post [as Gaza prime minister]."

The source went on to say that the two groups had agreed that, once the new cabinet was sworn in before Palestinian President Mahmoud Abbas in Ramallah, the suspended PLC would reconvene to choose new assembly leaders.


The new unity government will be the product of an April Palestinian reconciliation deal that aims to end rifts that have marred the two groups' relations since 2007.

Senior Fatah official Azzam al-Ahmad left Gaza on Tuesday after a two-day visit in which he met with Hamas officials to finalize details of the new cabinet.

The deal stipulates the formation of a government of national accord to serve until legislative and presidential elections can be held in the occupied West Bank and the besieged Gaza Strip.

Tension has run high between Hamas and Fatah since 2007, when Hamas routed troops loyal to Fatah leader Abbas and seized control of the entire Gaza Strip.

Continued conflict between Hamas and Fatah obliged the former to set up its own government in Gaza, while Fatah did the same in the West Bank city of Ramallah.