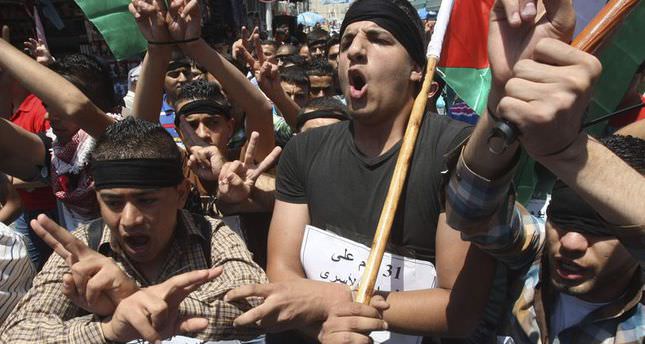 by Anadolu Agency May 31, 2014 12:00 am
TULKARM — A number of Palestinians suffered temporary asphyxiation on Saturday after Israeli forces used teargas to disperse a rally in the northern West Bank city of Tulkarm in solidarity with hunger-striking prisoners.

Some 120 Palestinian administrative detainees have been on a hunger strike since April 24 to protest their continued detention without trial by Israeli authorities, according to the Palestinian Ministry of Detainees and Ex-Detainees Affairs.

The ministry added that 30 more prisoners are expected to join in the strike on Sunday.

Administrative detention orders can range from one to six months in length and can be extended by up to five years by Israeli military courts.

Around 5000 Palestinians continue to languish in more than 20 detention facilities throughout Israel, according to a report by the Prisoners Center for Studies and Research, a Palestinian NGO.

These include 200 minors and 19 female prisoners, the report said.